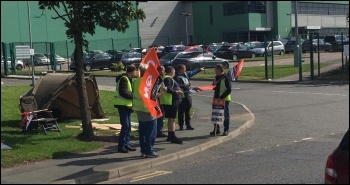 Members of the GMB union voted with a turnout of over 50% and returned a majority vote to take industrial action against poorer conditions in relation to back pay and the cost of living element. 500 workers walked out for 24 hours on 19 August.

GMB regional officer at Matalan Steven Boden said: "A pay rise offer of only 1.5% for weekend crew, and 2.9% for Monday-Friday staff, are both clearly below the current inflation rate.

"The union is asking for a one off payment to meet 'backdating demands' to an original anniversary date of April, but Matalan's offer is only to July, and is therefore taking from worker's wages to fill shareholders pockets."

The Hargreaves family who own Matalan sit on a fortune of £500 million. Yet they are not even willing to budge for a potentially new ballot. This shows a hardline approach which sees the workers as worth less than a living wage and the rate of inflation.

This comes at a time when staff are concerned at the company's intimidation and a rising bullying culture within the workplace.

The ball is in Matalan's court.