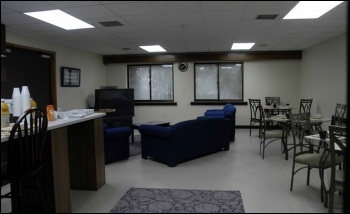 I work in a probation hostel.

Our employers tried to take away the staff rest room and make it into another bedroom for the residents. This would have generated more income and made us more attractive for privatisation.

Staff at my hostel work a variety of shifts: some are seven hours, some ten hours and some 12 hours over a 24 hour period. The nature of our work means we are unable to leave the building and we do not get official breaks. The rest room is the only place in the hostel without cameras or residents.

Staff were very angry about the proposal and we all signed a petition against losing our rest room. We also contacted our Unison union rep who lodged a grievance. Management were left in no doubt about the strength of feeling. The hostel would not operate effectively without the goodwill and dedication of the staff and this would have evaporated if the proposal had gone ahead.

Management have had a change of heart. The rest room has been saved, thanks to the solidarity of the staff.

When we fight we can win.