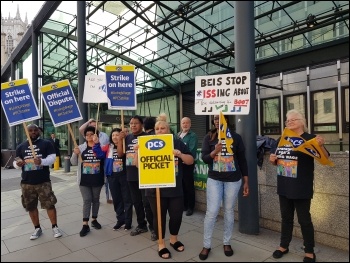 A lively picket line greeted visitors to the Department for Business, Energy and Industrial Strategy (BEIS) as caterers and cleaners employed by contractors entered their fourth week of continuous strike action over pay. The workers employed by Aramark and ISS at in London have been locked in a nine-month battle over the London Living Wage and poor working conditions. BEIS receptionists, working for ISS have also voted 100% to strike and will be taking action for five weeks in September.