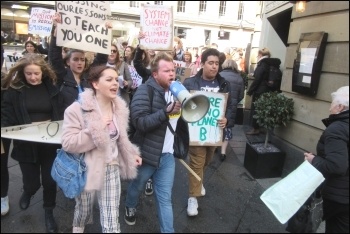 Socialist Party members successfully tabled a motion at Cardiff Trade Union Council (TUC) to support the call for trade union meetings and stoppages on the day of climate action on 20 September.

The TUC agreed that climate change is a trade union issue because working people will be worst affected by the effects of climate change, and because our members' jobs and conditions are under attack from the same corporations that are responsible for most of the carbon dioxide emissions.

It was also agreed that the trade union movement should intervene to ensure a just transition away from carbon emitting industries to green industries that protect jobs and ensure decent pay and conditions.

The TUC noted the appeal by the University and College Union for a 30-minute stoppage on 20 September and agreed to support the call for trade union action on that day. It called on affiliates to organise workplace gate meetings or stoppages where appropriate. It was agreed that Cardiff TUC would organise a lunchtime rally for workers in the city centre at 12 noon on 20 September and requested the support of the Wales TUC for the rally.

Socialist Party member Sue Atkins, got a motion passed at the trade union council calling for a meeting on the 5 September to coordinate activity for the 20 September climate action day. This will be open to all unions and groups, not just those affiliated to Southampton TUC.

Fellow Socialist Party member Bea Gardner raised the 20 September climate strike at the local executive of her union, UCU. The executive agreed to organise a lunchtime rally and has written a blog to members who are already coming forward wanting to get involved.

In July, Waltham Forest TUC organised a public meeting with climate change activists, Extinction Rebellion (XR). The meeting was a debate between XR and trade unionists, as well as discussing how to organise workers for 20 September.

Suggestions included calling a 30-minute lunchtime stoppage, with workers holding placards, signs and giving out leaflets. The TUC agreed to email all its affiliates and supporters to take part in this action.

Waltham Forest has been awarded 'Borough of Culture' in 2019. Socialist Party members effectively exposed the hypocrisy of Waltham Forest Council which has voted through a plan that involved destroying 81 trees as well as public spaces around it. They are also carrying through cuts to libraries and vital services while at the same time declaring a 'climate emergency' for the borough.

We linked the campaign to Save Our Square and against cuts in services to the climate change issue.

The TUC agreed that it will ask local authority workers to take part in the climate strike action and demanded that Waltham Forest Council does not discipline any workers who do so.