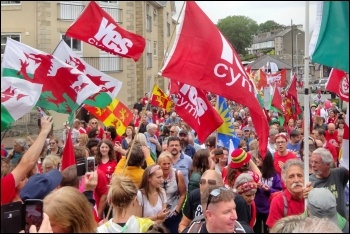 8,000 marched for independence in Caernarfon, photo by Llewelyn2000/CC   (Click to enlarge)

The disillusionment among the Welsh working class with the political establishment was reflected in the 53% vote to leave the EU in 2016 and the current rising support for independence. All the Westminster-based parties that have implemented austerity have lost support in Wales.

Fundamentally this discontent is rooted in a near decade of austerity that has blighted the lives of millions and wiped out one third of public services. The disgust with the austerity parties and the Brexit impasse is reflected in both a rise in support for independence for Wales and paradoxically also support in some sections of the working class for the populist Brexit party whose leadership hides many of its right-wing anti-working-class policies.

The Assembly is celebrating its 20th anniversary and Welsh Labour governments have been in power in Cardiff Bay since its inception. For half of that time they have presided over the most devastating cuts to public services in history, tamely implementing the cuts demanded by the Tories and Lib Dem Westminster governments.

And as well as the right-wing policies being pursued by Welsh Labour in the Senedd, Labour dominates Welsh councils that have implemented Tory cuts to local services.

The discontent with the main political parties and Labour in particular has been reflected in different movements within the working class especially within the depressed area of the South Wales valleys - the areas patronisingly referred to in the metropolitan press as 'Left Behind'.

These areas traditionally had big Labour majorities, and have been hit hardest by austerity, with Universal Credit just the latest attacks that have devastated living standards.

The Leave vote in the 2016 EU referendum, among the highest in the UK in these areas, was a reflection of the rejection of the political establishment and the status quo.

The growing support for Welsh independence is also a reflection of a rejection of the Westminster elite. The Brexit gridlock in parliament has added to the general opposition to the status quo. Support for independence which dipped as low as 3% in 2014 is rising above the normal 12%. 8,000 marched for independence in Caernarfon and over 2,000 in Cardiff.

There is renewed positivity for independence in working class areas in the south. The marches revealed a new layer of 'indy-curious' working class and young people who are also interested in the ideas of socialism.

The vandalism of the memorial to Tryweryn, the village in North Wales flooded to provide water to England, has led its slogan, "Cofiwch Dryweryn" (Remember Tryweryn), to be spray painted on walls across Wales. Many of the fears that Wales is too economically poor to be independent have been pushed to one side as people fear that it cannot get any worse than it already is.

The support for independence is partly an indication of the feeling that devolution has failed. The Welsh government has weaker powers and far less resources than the Scottish parliament. Welsh Labour governments have merely managed the decline of the Welsh economy and the emasculation of public services.

One reflection of the discontent with the Welsh Assembly is a feeling among a layer of older workers that it is a waste of money. But a growing layer of young people want more autonomy and even independence to break away from austerity-ridden and corrupt Westminster.

The Indy movement is at an early stage but if Corbyn fails to win the general election and a Tory coalition were to hang on to power then the movement would gain even further momentum and support could rise rapidly to unprecedented levels across Wales.

If Corbyn wins and his government fails to carry through the reforms promised in his manifesto or continues the Tory cuts then equally there could be a rise in support.

Such a government would also give rise to new struggles by the working class and the trade union movement, but they would not necessarily cut across a rise in support for independence.

For a socialist Wales

Socialist Party Wales supports autonomy for Wales with a Welsh parliament that, with a socialist government, could break with Westminster austerity and pass measures to abolish Universal Credit in Wales, abolish zero-hour contracts, introduce a £12 an hour minimum wage, nationalise firms like Ford that threaten closures, and nationalise the commanding heights of the economy.

It could implement a socialist green programme to transition from polluting industries without loss of jobs and invest in providing jobs in green industries like tidal power.

Such a government would need to mobilise the working class in Wales to implement those policies in the teeth of opposition from British and international capital. It would also inspire similar movements in England and Scotland, if it were to succeed in transforming society.

This is in contrast to Plaid Cymru who call for an independent capitalist Wales. Plaid leader Adam Price has called for more tax cuts for the rich corporations in Wales to 'attract investment'. He has tried to create the illusion that Wales could emulate Ireland as a tax-free playground for the global corporations.

Plaid is riding high in the polls as support for independence or autonomy rises and a YouGov poll had the party leading Welsh Labour in polls for the Welsh Assembly.

But Plaid's deal in Brecon and Radnor to help the Lib Dems, partners in austerity crime with the Tories, shows that Plaid is not an anti-austerity party. Plaid councils have been just as bad as Labour councils in carrying out cuts.

If Jeremy Corbyn was to put forward a manifesto with socialist policies then it could cut through the scepticism with Labour in Wales and win a big majority of Welsh seats. Even a manifesto with radical policies similar to the 2017 manifesto could win a majority.