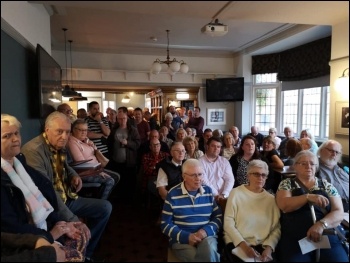 The threat of a government-imposed congestion charge in Coventry led 100 people to attend the second public meeting called in opposition to it on 2 September.

The Socialist Party has argued that the quickest and most effective way of tackling deteriorating air quality is major public investment into clean, more frequent, reliable and cheap public transport - not punishment taxes on those unable to afford newer cars.

Twice as many trips in England are made by bus compared to rail, but government support for bus services has almost halved in real terms in the last 15 years.

And with nine private companies competing for bus routes in the city, Coventry Socialist Party is arguing that renationalisation of buses must be a key component in planning for people's needs, not operators' profits.

A campaign petition launched by Socialist Party members has now reached 9,000 signatures. When it reaches 15,000, the city council is obliged to hear a public debate in the council chamber. A third public meeting is planned in two weeks' time.