Help us move our press by October: pay in your building appeal pledge! 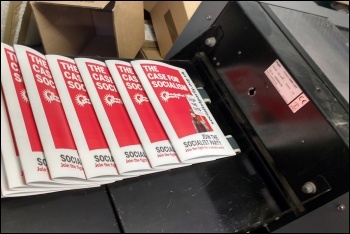 The Socialist Party's press is an essential political tool, photo by James Ivens   (Click to enlarge)

Regular readers of the Socialist will know that the Socialist Party launched a building appeal in 2018, following our eviction from the premises we had occupied for nearly 20 years.

We set an initial target of £150,000 and the response has surpassed all our expectations. The appeal has now reached an incredible £201,501 of paid donations: 134%.

This has only been achieved through the tremendous sacrifices made by members and supporters of the Socialist Party throughout England and Wales. They have donated up to a week's income, or more, over the course of the appeal - because they recognise the importance of maintaining our national centre in London.

Together with a mortgage, it has enabled us to buy the new premises we recently moved to. We have just held our first national committee meeting here as well, saving on the costs of hiring an expensive venue.

We will shortly also be moving our printshop, where we print our monthly journal Socialism Today along with all our leaflets, placards, posters and pamphlets. This will be the first time for 20 years that we have been able to accommodate the printshop in the same place as our headquarters.

We are appealing to all our readers and supporters to help with the costs of this move. It will cost up to £4,000 to move our press alone - plus all the other equipment, including the finisher, guillotine and strapper that we use for producing and distributing all our material.

We have to complete the move by the end of October. If you have already promised a donation - and there is still £26,000 in outstanding pledges - can you pay some or all of it in the next two months?

Our new premises will be a great asset for the Socialist Party as we head into a tumultuous political period, campaigning for a socialist Brexit, for a Corbyn-led Labour government with socialist policies, and building support for socialist ideas. We thank all our members, and readers of the Socialist, who have helped to achieve this.