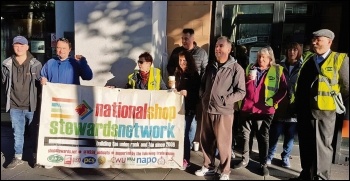 The PCS strike at the Driver and Vehicle Standards Agency (DVSA) involving the IT Service Desk and the Approved Driving Instructor Teams is coming to the end of its fourth week.

The dispute is over many issues but staffing and bullying are the main issues for the teams out.

These teams' last day of strike action is 19 September and the union has made clear they are prepared to bring out members in other teams if there is not a satisfactory resolution.

There is no doubt the strike has had an impact alongside the threat of other teams being brought out at various times such as Driving Examiners and Enforcement Teams - the latter potentially around 'Brexit day'.

If it wasn't for the strike, why would Chief Executive Gareth Llewellyn have just written to the union to discuss talking? He has not personally negotiated with PCS in his tenure of over three years!

However, alongside his offer to talks, there appears to be a threat to stop 'check-off' (automatic deduction from pay) of union subs if the action is escalated.

Llewellyn is trying to pressurise them with a carrot and stick approach. The union can clearly see his strategy and don't want to fall into a management delaying tactic.