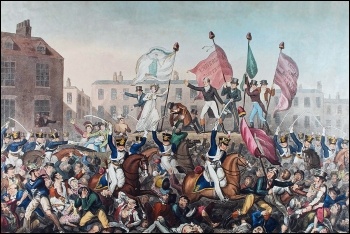 When I met Robert Poole, the author of 'Peterloo: The English Uprising', at the recent bicentenary commemorations, he asked me if he had taken too long in getting to the actual events of 16 August 1819.

The book thoroughly describes the position of the different class forces at the time. The ruling class - in Manchester mainly the biggest manufacturers, but nationally also the landed aristocracy and financiers - was clear that movements for reform had to be crushed.

In the chapter entitled 'Conspirators', the author describes the state of the radical movement. In some towns, its 'unions' and 'societies' reached sizeable numbers.

But, "in Manchester, spies and informers had penetrated the radical network from top to bottom." Infiltration was organised not just directly by the Westminster government but also by local magistrates who ran networks to gather information about the radicals' intentions.

Nevertheless, the following chapter, 'Strikers', shows the actual fear of the authorities in the face of the strike movement of 1818.

When the spinners took strike action, they organized against 'knobsticks' (scabs): "Four or five hundred or perhaps one or two thousand assembling from different factories and at the hour of work, viz. 4 or 5 o'clock in the morning go to a factory at the other end of town where they are not known, and so carry off by force or intimidation, though without any violent breach of the peace, the hands who might be disposed to go to work."

Even the Home Secretary, Lord Sidmouth, considered this agreement "judicious, but the disclosure of it at this moment would have an appearance calculated to produce very injurious effects" - to the bosses, not the workers!

Manchester stipendiary magistrate James Norris wrote: "I cannot think that the trades are at all organized for a general turnout [strike]... but the idea necessarily acquires strength amongst the lower classes... and some are no doubt ripe for it at this moment."

Similarly, Bolton magistrate Colonel Fletcher was worried: "The danger of a committee dictating what wages must be paid, is manifest, and if [it] should be submitted to, a worse than universal suffrage would succeed. It would introduce a mob oligarchy, bearing down on all the better orders of society, and would quickly be succeeded by universal anarchy"!

Poole writes: "At first only certified delegates were admitted, but early in the proceedings 'the doors were thrown open for general admittance and the room was instantly filled by the working class of people who manifested a very strong feeling for a general movement.'"

This was the mood in the Manchester region just five weeks before the demonstration on St Peter's Field. (See 'The Peterloo Massacre 1819' at socialistparty.org.uk).

It is clear that the government and local authorities feared the 'English uprising' in the book's subtitle. The author deals with the day itself in two chapters.

Soon, the true nature of the day's events came out, causing mass revulsion and anger. But then, and subsequently, the government and its apologists attempted to cover up and lie about the extent of the violence.

HNV Temperley, a historian, could write in the Cambridge Modern History of 1902 that "one man was killed and some 40 wounded", figures that were often repeated, including in schools to history students. The real figure was 18 killed and almost 700 wounded.

It used to be said that history was written by the victors, as emphasised by Temperley's quote. But Robert Poole is on the side of those who fought for democracy and a better life. 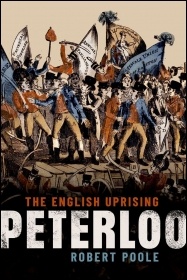 Peterloo: The English Uprising by Robert Poole   (Click to enlarge)