Socialism 2019: An unmissable event to discuss the questions confronting us and socialist ideas 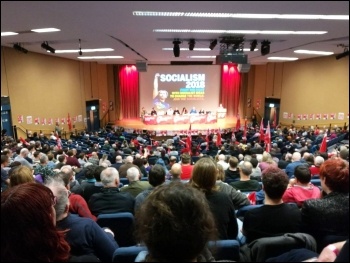 Events swirl around us. Governments offer no solutions. Westminster spirals deeper into chaos. Austerity rolls on. What is the way out? More specifically what is the way out in our interests - not for the bosses and billionaires?

This is what Socialism 2019 is about - the questions confronting us and socialist ideas to point a way forward.

Can Johnson be booted out? How do we deal with bullying bosses? Can the Blairite plotters who want to do Corbyn in be stopped? How do we overcome the divisions between different groups of people in society?

One of last year's Socialism attendees said that "hearing stories of working-class people standing together to fight for socialist values left me feeling hopeful for the future at a time when austerity seems never ending."

The struggle against austerity is the struggle to defend our living standards and everything that the working class has won. We'll discuss: 100% council homes and the fight against homelessness; how do we end the universal misery Universal Credit brings? and Corbynomics - is it socialism or Keynesianism?

At Socialism 2019 we will discuss: Is climate change too urgent to fight for socialism? Did socialism fail in Venezuela? And what do we even mean by socialism? Can capitalism be reset or is more fundamental change needed? Is the working class still able, like Karl Marx said, to be capitalism's gravedigger, the agent of socialist change?

These are complicated times. Finding a way forward is not easy. People are sick of Brexit - yet socialists and the labour movement can't abandon these issues to the bosses and their representatives. That's why we will our sessions include: Is a pro-worker Brexit deal possible? We will also look at Brexit in context - Trump, trade wars and tariffs, and Northern Ireland, Brexit and the border.

Another Socialism 2018 attendee remarked that it was "fantastic to hear about struggles in Britain such as the Glasgow equal pay dispute and the Refugee Rights campaign". Fighting oppression is on the agenda at Socialism 2019: What do Marxists say is the way to end violence against women?; 50 years after Stonewall, how can LGBT+ rights be fought for and defended?; identity politics in the fight against oppression.

Socialists are internationalists. The mass struggles in Hong Kong, Sudan, and Kashmir will feature, and Marxists from across the world will participate, enriching the discussion enormously.

So, if you want to be inspired for the battles ahead, to meet new friends in the struggle, to share your experiences and your ideas, and to build the ideas of socialism - then this is an unmissable event!