We asked people who have bought tickets for Socialism 2019 why they are coming. Their answers show how this festival of ideas taking place on 2 and 3 November is an unmissable event for everyone wanting to fight the bosses and the Tories and to defend working-class living standards.

Get tickets and info: www.socialism2019.net 10% discount on tickets until 1 November 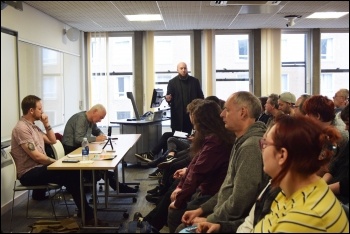 As a postal worker, a CWU member and branch secretary of Scotland No.2 branch of the CWU, I'm attending Socialism this year as it's a great place to meet fellow working-class people and hear socialist ideas about how society should be run. This could not come at a better time for us postal workers as we're facing the most anti-union management we have ever had.

I'm coming to Socialism 2019 because it is the best place to find clarity in such turbulent times about what is going on and what I can do about it. This is my 4th year and every year the things I discuss at Socialism end up being the things which sustain me politically for the year ahead, through all the ups and downs of whatever battles open up or capitalism throws at us.

At a time when it seems the whole world has gone mad, it's a chance to get some clarity and re-charge the batteries for the struggles to come.

The opportunity to spend a weekend meeting, discussing and enjoying time with like-minded socialists, trade unionists and comrades can't be missed. A must-attend every year.

Socialism is a wonderful opportunity to develop your political understanding of a volatile capitalist world and to get strategies for the working-class fightback.

The sessions are brilliant and it's great to meet activists from around the country and internationally.

The debates and rally are inspiring, even for an old-time revolutionary like me. It brings together the cream of working-class activists and fighters who show the real strength of our movement.

Being at Socialism is a bit like being on an island of calm surrounded by storms of confusion when looking at the world today. I always feel refreshed and inspired afterwards.

I'm coming to Socialism 2019 to further my knowledge on the past and present so I will have more confidence to take part in discussions, debates and campaigns.

I look forward to the event every year. I am spoiled for choice over which sessions to attend. You learn so much about socialism in just one weekend. And it's great to make new friends and meet up with old ones. I never tire of it.

Socialism for me is an anchor in troubled, political waters. Our annual 'Socialism' never fails to move and motivate me. Can't recommend it highly enough!

I'm coming because we need socialist solutions as the cracks deepen in this brutal capitalist system.