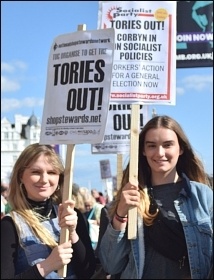 Moments in history like this make us question what we can do to influence things. As individuals, ordinary people have little power against the immense force of world events.

But when, together, we discuss and fight for a clear set of ideas, working-class and young people can have huge clout.

The Socialist Party fights for socialism. For taking the power out of the hands of the rotten, irrational and exploitative elite. For planning society democratically to provide for all.

This October is a special recruitment month for the Socialist Party. If you're looking for a way to fight back, join us. There's no better way to help or to learn than to get stuck in.

For our recruitment month, we've reprinted our pamphlet 'The Case for Socialism - Why you should join the Socialist Party', and a leaflet outlining our record in struggle. Contact your local Socialist Party organiser or our national office if you want any of this material - or to join!

Why I joined the Socialist Party: I was looking for a clear left alternative to the big issues

It started when I became a member of the GMB union on my very first day of work in the construction industry. Being around this sort of working camaraderie helped me learn about how effective collective action can be in fighting against the negatives of capitalism.

I was also educated by the older generation. They would spend countless hours on jobs teaching me how combating issues as a collective can give us some protection from being exploited.

I always wanted to help other working-class people in their day-to-day struggles, whether that was joining other tradespeople picketing sites, even if I wasn't working on them, or donating parcels to local food banks in my area.

But I felt this was only getting me so far. I wanted to help larger numbers of my class.

I joined the Labour Party for a couple of months, but felt the direction it was going in really didn't fit my way of thinking. I was looking for a clear left alternative to the big issues in society today. For example, I'd like a Brexit which improves the lives of working-class people, not the wealthiest.

After speaking to different people I was working with, somebody put me in touch with the local Socialist Party, and I was invited to attend a meeting.

This meeting was taking place in the function room above a local pub. So I went along, pint in hand, and within five minutes of sitting at that table, I knew that I'd found what I was looking for.