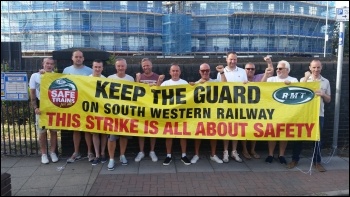 Socialist Party member Jared Wood is standing for the RMT transport union's national executive committee in the London transport region. He is standing on a programme of:

Jared says: "My record shows that I can unite grades and members involved in different disputes and develop an industrial strategy to put maximum pressure on employers and win our demands.

"I will ensure that we do everything possible to defend jobs, pay and conditions through negotiations. But where this cannot be done, I will talk with reps and members to devise a fighting campaign of strike action and other actions to win our demands.

"If elected, I will initiate a widespread fight against the government and London Mayor to restore our funding and reverse cuts. I am a member of the Socialist Party and I am committed to RMT's socialist aims. This includes opposing all cuts and privatisation.

"I will continue RMT's support for a Corbyn-led Labour government with policies that include repealing anti-union laws and renationalisation of rail. I will oppose our union giving money to any politician who does not share RMT's principles.

"I will make myself available to reps and members. I will strive with reps and activists for equality for all in the workplace and to defend members under attack from management. I believe that giving effective support to our network of local reps and activists is an essential part of representing members at NEC level."

Ballot Papers will be posted to your home address on 21 October 2019.