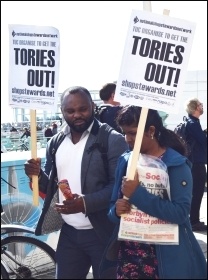 Boris Johnson will be hoping that the archaic ceremony surrounding the Queen's Speech will act as a distraction from the Brexit crisis. An unofficial party political broadcast, it combined empty promises on social issues with a hardline 'law and order' agenda.

The speech pledged to "support and strengthen the NHS... enabling it to deliver the highest quality care".

Time and time again the Tories have shown they cannot be trusted with the NHS. Recent reports show that 4.3 million patients are stuck on waiting lists.

There are labour wards that are too cold to safely care for babies. One hospital trust reported faeces had seeped through the floor in an ultrasound corridor.

Victims of domestic abuse have been promised transformative legislation. Any legal protection is welcome but it is necessary to fight to end cuts to the services women need to be safe.

The Tories have presided over almost £7 million of cuts to refuges since 2010. Such is the shortage that there have been cases of women and children being rehoused, unsafely, in generic homeless hostels.

The Queen's Speech also announced Johnson's promise that "all young people will have access to excellent education - unlocking their full potential". Tell that to the children who have had their school hours cut because education budgets have been slashed to the bone.

It seems that as mayor of London Boris Johnson had no qualms handing out taxpayer-funded grants to a known associate. And Tories have always been happy to pay off bankers and cut taxes for the rich.

But Johnson's promise to deliver all the pledges outlined in the Queen's Speech, under what he brags will be a "dynamic free-market capitalism", will be like pie crusts - easily broken!