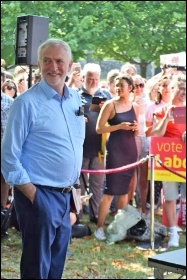 The Tory government's new spending promises are not a change in a working-class friendly direction. Rather, they are temporary concessions in an attempt to win a general election. Having seen his party's opinion poll lead increase to an average of eight points, Boris Johnson hopes it is within reach of winning a parliamentary majority in an election, whatever happens with Brexit.

The polling figures are hyped up by the right-wing media. But just a brief look at what happened in the last general election shows that voting intentions can change very rapidly. Just two months before the June 2017 election, Labour was polling around 25%. But by election day it had gained 16 points to achieve a vote of 41%, just 2.5 points behind the Tories.

Will a similar or greater surge happen again, despite the disappointment in Corbyn that has accumulated because he hasn't led a bold, offensive challenge to the Tories or spearheaded the building of a mass mobilisation to remove them from power? There are signs that the potential exists for it, such as the rally in Newcastle on Saturday 5 October which drew thousands of people to queue up to hear Corbyn speak.

Another indication is a recent study of low-income voters by the Joseph Rowntree foundation. It showed that Labour has a polling lead among low income voters. Regarding those in that layer who didn't vote in the last election, over half intend to do so next time.

Brexit not only issue

The same study states: "Despite the unique role Brexit will play if there is a general election soon, it would be a mistake to run campaigns purely about Brexit to attract voters among this group. Brexit is not the uppermost issue in their minds". The cost of living, health, crime and housing came higher up than Brexit on people's list of priorities.

So Johnson could discover that Brexit won't dominate in workers' minds as much as he expects - a pitfall which befell Theresa May in the 2017 election when her government came under attack for its record of cutting public services.

However, while Corbyn's pledges are attractive - scrapping tuition fees, ending Universal Credit, nationalising water companies, a £10 an hour minimum wage, etc - they won't be enough to automatically guarantee an election victory. The Rowntree report also pointed to the generally low levels of trust in the leaders of the parliamentary parties. Corbyn and those around him at the top of Labour have to get across an ability to actually deliver on their manifesto - to convince that they will be able to withstand the pressures they will face from the capitalist establishment and big business. 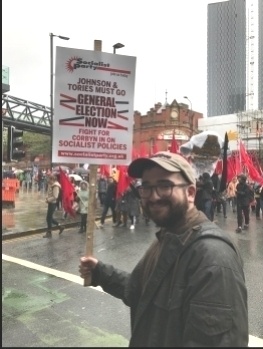 Protesting in Manchester against the Tories at the start of Tory Party conference, 29 Sept 2019, photo JB   (Click to enlarge)

There have been more warnings recently on this vital question. Corbyn's correct insistence that a general election should take place as soon as possible is constantly weakened by the public utterings of Labour MPs who want to put it off for as long as possible. The mantra 'referendum before election' has been coming from many on the Labour right and, unfortunately, has also been echoed in various ways by a number of shadow cabinet ministers on the Corbyn-supporting left.

Some of the right-wing Labour MPs are also desperate to prevent Corbyn from becoming the leader of an interim 'caretaker' minority Labour government. Failure to directly challenge these Blairites - and force them to abide by working-class interests, or leave Labour and join a pro-capitalist party - will only fuel more scepticism on whether Labour can deliver its policies.

John McDonnell, in a GQ magazine interview published on 11 October, was way off beam when he said: "I've never seen the Parliamentary Labour Party more united in the last couple of years. Everyone is very careful about holding that political vase so that we don't drop it."

If an analogy with a vase is to be drawn, it can only be a vase with a deep class-based crack in it, which will inevitably break into two pieces if the Corbyn wing rightly pursues a pro-working class course.

The aim cannot be unity at the price of capitulation to capitalist interests and backing away from socialist demands. Corbyn must stand firm against such 'unity' and McDonnell should back him. And they must go further than that - to expose the politics of the right wing, challenging their positions and removing the whip where necessary; and strongly backing mandatory, democratic reselection contests at a local level.