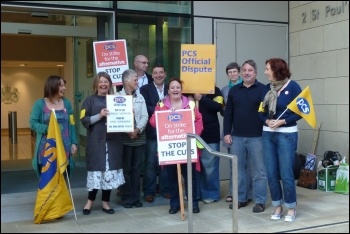 Marion Lloyd is on the ballot paper for the PCS general secretary election having won 39 nominations from all parts of the union.

The election starts 7 November when ballot papers will be posted out to members. It closes at noon 12 December.

Marion is a member of the Socialist Party, is the elected president of the BEIS Group and a member of the PCS national executive committee. She has been a PCS member all her working life and has been employed in a range of government departments big and small.

Marion says: "I'm delighted with the response from branches, activists and members. I am looking forward to taking my programme to PCS members in the ballot. I am standing on the basis of 'Action not Words', addressing key issues such as:

"I led a successful campaign to stop the closure of my own office, BIS Sheffield. I feel the tremendous support for my candidature reflects a recognition of my record. But also I sense there is a mood for change and for a fresh approach. I am the candidate who best meets this need."

There is very little time for PCS branches to get ready for the next critical stage of this important election. Ballot papers go out to members on 7 November.