Link to this page: https://www.socialistparty.org.uk/articles/29733 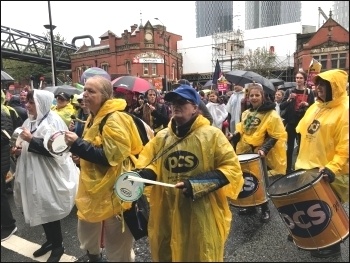 At the last National Executive Committee (NEC) meeting of the PCS (Public and Commercial Services union) in September, there was a debate about the union's political strategy. Socialist Party members in PCS responded to that discussion in the Socialist (25 September: PCS national executive committee bypasses members on backing Labour candidates).

That article was attacked by the supporters in the union of general secretary Mark Serwotka. Dave Semple, a Socialist Party member who is on the PCS NEC, responds (personal capacity).

Forcing an early general election with Labour standing on a radical manifesto as in 2017, is the best way to cut through the Brexit impasse, defeat the Tories and secure the election of a Jeremy Corbyn-led government.

This makes it even more important to debate and decide how PCS can best intervene in the general election in the interests of union members and in line with union policy.

PCS policy as set out in several Annual Conference decisions and a membership ballot which recorded over 70% support, is to support parliamentary candidates (in exceptional circumstances) who have a proven record of supporting PCS campaigns, disputes and raising issues in parliament and publicly on our behalf.

The NEC, based on the consultation across the union and the imminence of a general election, has recently announced its political strategy to members and branches.

We would all agree we are in exceptional circumstances but at no time has conference ever agreed that PCS should call on all PCS members to vote for and commit union resources to the election of all Labour candidates standing in England and Wales. It is the NEC alone that has decided this.

The PCS Left Unity National Committee (LUNC) has issued a statement criticising a Socialist Party article on the NEC decision. Full of the usual bluster and invective, you are left asking what it has to do with the price of fish.

There is widespread concern and opposition to the NEC decision right across the union and to the false assertion by the LUNC that the decision is instructed by conference. These concerns extend way beyond the Socialist Party.

In an honest debate we would all acknowledge that there is a genuine dilemma in both calling for a Corbyn government and supporting parliamentary candidates who support us.

The NEC and LUNC supporters have tried to resolve this dilemma by calling on PCS members to vote for all Labour candidates in England and Wales.

The NEC is right in recognising the different situation in Scotland but its decision to call on PCS members and commit funds and resources to supporting all Labour candidates in England and Wales is not in the interests of PCS members and oversteps the mandate given to the NEC by conference.

PCS should issue guidance on PCS policy aims and what we are asking candidates to support. Branches should be invited to seek support for a parliamentary candidate in their constituency who has campaigned and supported members and the union.

This should be discussed and agreed between the branch - or branches - in a constituency with the NEC. This is a clear practical alternative to the NEC decision and expresses the democratic policy of the union.

It would also prevent the situation created by the NEC decision where union members are called upon to vote for a majority of Labour candidates who have worked tirelessly to unseat and undermine Jeremy Corbyn and who do not agree with the 2017 Labour manifesto and the PCS policies contained within it. They are not likely to change their ways under an incoming Labour government unless or until they face deselection.

Many of these MPs supported the Blair/Brown government in the cuts, privatisations and erosion of pay and conditions it inflicted on the civil service -which have been accelerated by subsequent Tory and Lib Dem governments. Mark Serwotka and his supporters expect PCS members to ignore the record of those MPs towards members' interests, hold our collective nose and give them our vote.

According to the LUNC:

"No-one in the union leadership support the Blairites. It is nonsensical to suggest PCS should, in defiance of ADC policy, operate a policy based on selective support for specific MPs, a position that would lessen, perhaps critically, the chances to elect a Corbyn-led government."

So there we have it. PCS members in England and Wales should vote for all Labour candidates irrespective of their record towards union policy, including the Blairites like Watson, Kinnock or Streeting, to name a few.

Implementing union policy consistently agreed at conference and endorsed overwhelmingly in a membership ballot in favour of selective support for candidates who support PCS, which would almost certainly mean support for many excellent MPs who support Jeremy Corbyn and John McDonnell who have been such staunch supporters of the union, is dismissed as "nonsensical".

There is nothing in any conference motion that gives any specific commitment to blanket support for all Labour candidates in England and Wales. The NEC was only ever authorised to consult and bring back a policy. If the results of the recent consultation show support for this policy, let's see it. Policy is made at conference and the practice of Mark Serwotka and the NEC to carry out 'consultations' are only ever a guide and should never be used to bypass conference policy.

What has been overlooked by the NEC and supporters of its decision on the LUNC is that we are discussing a political strategy for a trade union; one that reinforces our bargaining power with the employer. How we choose to vote as individuals and the position of the Socialist Party or any political parties for that matter is of relevance or interest dependent upon your viewpoint.

PCS took a conscious decision not to affiliate to the Labour Party and this was not just the view of conference but most would agree it is the view of the vast majority of members and would be reflected in a membership ballot. So our political strategy needs to be based on an understanding of the union and how we can best implement union policy.

That supports those politicians who can be relied on to fight the union's corner and does not alienate members who may support a political fund but are sceptical and often hostile to PCS committing funds and resources to a particular political party.

Mark Serwotka and the NEC have got it badly wrong again by failing to take proper account of the views of members and the policy of the union.