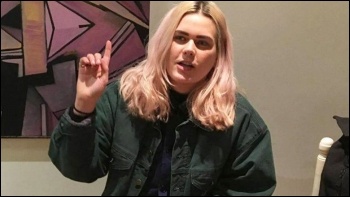 The Rail Accident Investigation Branch (RAIB) has published its report on the death of Beth Roper, who died in an accident on a train near Bristol last December. The report has been anticipated by many in South Wales. Beth's tragic death at just 28 was a great loss to her family, her numerous friends and the Socialist Party, especially in Cardiff where she was a leading member.

Beth was a real campaigner. Family and friends have set up two organisations in her name to fight for refugees and for marine conservation, and many of us remarked that if one of her friends had been taken from us in the way that she was, she would have fought tirelessly to try and make sure it couldn't happen again.

The report confirmed what many of us knew already, that train company Great Western Railway (GWR) "had not provided adequate mitigation measures to protect against the risk".

Not only did the company ignore warnings after a passenger in London died after similarly leaning out of a window in 2016, but it also left the track margins uninspected for potential obstacles for ten years.

In the five years before Beth's accident, GWR knew of about 16 people who were injured on the line in the same way that she was but did nothing significant to address the danger.

The trains that GWR was operating use a method of opening the doors which should have ended with World War Two. Passengers have to pull down the window, lean out and turn the handle on the outside. Despite the fact that the trains routinely travel over 75 miles an hour, the windows can be opened at any point in the whole journey.

The RAIB report doesn't go far enough in its recommendations: these trains need to be immediately replaced so that no-one else is hurt or killed in the same way. But we shouldn't have to wait for a tragedy before action is taken.

Passenger safety, not profit, should be at the heart of the rail industry. That's why we support the campaign of the RMT transport union to keep the guard on the train and oppose driver-only operated trains.

And that's why GWR must be stripped of the franchise, which should be taken into public ownership with the rest of the rail network to ensure that short-term cost-cutting profiteering won't put anyone else at risk.