Minimum wage debate: What should we be demanding? 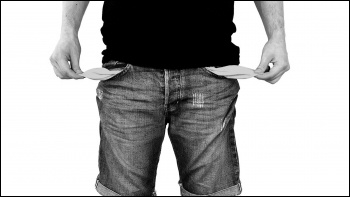 In the last issue of the Socialist, we initiated a debate about how we can end low pay and what level of minimum wage we should be fighting for. See 'Minimum wage debate: how can we end the scandal of low pay?'. Three readers have sent us their thoughts and we print them below. If you've got a view, email editors@socialistparty.org.uk.

What should the minimum wage be? Alistair Tice wrote an excellent article in the Socialist (see above).

A Trade Union Congress (TUC) study reported average weekly wages in Mansfield fell from £379 in 2008 to £322 last year. In 2008, Mansfield average pay was £84 a week below the national average - £125 below in 2018. So Mansfield Socialist Party recently discussed this.

The Office for National Statistics said the median hourly wage for full-time Mansfield workers in 2018 was £11.01. It's probably less for part-time workers.

Such low pay is a condemnation of large local employers like Sports Direct. The end of mining and public service cuts lost us better-paid, trade union-organised jobs. The TUC produces well-researched reports, but fails to seriously fight to win decent pay for the army of low-paid workers.

Mansfield Socialist Party's campaign stall carries a poster for a £10-an-hour minimum wage. We get comments from small traders like gardeners and hairdressers that it would drive them out of business, as they couldn't afford to employ anyone.

We reply they should be subsidised, but big business should pay up. This usually satisfies them, if they stop for a discussion.

Recently, a health worker angrily said his qualification would be worthless if the minimum was £10. It turned out he was on Band 3 - on barely £10 - and agreed NHS pay bands needed a hike.

A serious national trade union struggle to end low pay would give confidence to workers and small businesspeople. In a low-paid area like Mansfield we think £12 an hour should be the headline figure - a step towards £15, which should be the main demand in high-cost areas like London.

I think Alistair Tice's centre page article on the minimum wage was excellent. I read the article three times, there was so much in it. I think all Socialist Party branches should be discussing it.

I'm going to move a motion at Beverly GMB union branch for next year's conference based on the article putting forward what we should be fighting for. It's not a minimum wage we need, but a real living wage!

What if you're not able to work?

Wages are only part of the battle against poverty. What if you are not working through sickness or disability, can't find a job or are caring for someone?

What if you are bringing up young children or retired? How can socialists fight for decent benefits which reflect the real cost of caring for children or living as a disabled person?

Sajid Javid said recently "we want to support hardworking people to succeed and provide for their families." This just isn't true.

In fact, it's very difficult for working-class and many middle-class people to earn enough to live comfortably on their wages alone, even with two wages coming in - because of soaring private rents, the cost of child care and wage freezes.

Increasing numbers of families, in particular, rely on in-work benefits such as housing benefit, tax credits, or now Universal Credit.

New Labour and Tory governments, with a lot of help from their friends in the media, created a 'hostile environment' for benefit claimants to prepare the way for significant cuts.

Since 2010, Tory-led governments have imposed the benefit cap, the 'bedroom tax' for council and housing association tenants with spare rooms, and limited tax credits and limited Universal Credit to the amount for two children from 2017 onwards.

They have also cut maternity and pregnancy grants and ramped up benefit sanctions for people who can't or don't meet the punishing regime of job searching (which low-paid and overworked Department for Work and Pensions staff are having to implement).

Universal Credit is a 'top up' benefit, paid whether you are in work or out, designed to bring you up to a subsistence level.

This has enabled employers to pay no more than the minimum wage, and get away with zero-hour contracts, knowing that the state will make up the difference. In effect, this is a transfer of wealth from taxpayers in general to large company shareholders.

Our demand for a real living wage would claw some of this wealth back. But it is also important to fight for decent benefits which reflect the real cost of (for example) bringing up children, or living as a disabled person.

Jeremy Corbyn announced recently that an incoming Labour government would abolish the benefit cap and the two-child limit, shorten the wait for Universal Credit to two weeks, and split the payments between adults in the household.

His longer-term aim would be to abolish Universal Credit and "introduce a system that will be based on the principles of dignity and respect, and it will alleviate and end poverty, not drive people into it".

Our demands on benefits and pensions should start, like our wage demands, with what we need to live on. But, as with wages, we also have to consider what demands people can realistically be mobilised to fight for.

Before Social Security benefits were slashed by Thatcher's government in the 1980s (and further cut by Tory and New Labour governments), if you lost your job you were paid unemployment benefit at 75% of your wage, at least for a time.

This reflected the strength of the trade union and workers' movement in the 1970s, but also the remnants of the post-war boom when capitalism could afford to concede more 'generous' spending.

The National Unemployed Workers Movement in the 1920s and 30s demanded work or full pay. Given that today's labour movement representatives have neglected to fight, and at worst colluded in the driving down of benefits, both these demands may seem unrealistic at present.

Our first demand on a Corbyn government should be to reverse all benefits cuts. But we should also demand an increase in all benefits linked to a minimum wage set at a level that lifts people out of poverty.