Link to this page: https://www.socialistparty.org.uk/articles/29769

Below is a transcript of the leading eulogy at the funeral service for Tony Mulhearn, given by Peter Taaffe, general secretary of the Socialist Party, in the Unitarian Church, Liverpool 17, on 21st October 2019.

Tony Mulhearn was a towering figure of the labour movement, particularly on Merseyside.

This is clearly indicated by the outpourings of praise for his achievements, and the tributes from figures of the labour movement far and wide, like Lennie McCluskey.

Of course his loss is most keenly felt by his loving, large, grieving family. But also by his close friends and comrades in the Militant, now the Socialist Party, including myself. 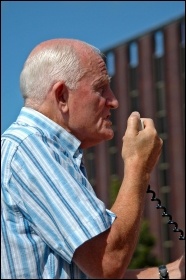 He was one of the greats, who devoted his whole political life to the cause of the working class, particularly in the epic battle of Liverpool city council against the evils of Thatcherite capitalism, which had demanded huge cuts in a city where there was already poverty.

However, she [Margaret Thatcher] never reckoned with the class determination of the ordinary working men and women of Liverpool.

I first met Tony more than 50 years ago.

I and about 40 comrades nationally were already supporters of the tiny group which set up the Militant newspaper.

Through intense discussions we convinced Tony to support our perspectives and programme.

Others may have faltered along the way but he remained an unswerving supporter of Militant and, I may add, a close personal friend, for the rest of his life.

For instance, during the Liverpool struggle in the 1980s I spoke to him virtually every day, as well as Derek Hatton, about the strategy and tactics for winning the great battle of Liverpool.

We give a full account of this in our book, 'Liverpool, The City that Dared to Fight'.

More recently he has followed with his own autobiography. These two books are essential reading for workers.

He did not enjoy or seek an easy life. It entailed difficulties and battles.

This is nothing new for the most advanced workers in Merseyside, with its history of iron determination to improve the rights and conditions of the working class.

Tony stood unequivocally for taking economic and political power away from the handful of parasitic capitalists, and placing it in the hands of the labour movement and working class in a democratic socialist Britain.

For this he earned the undying hostility not only of the capitalists, but of the right-wing Labour and trade union leaders.

However, it did not stop him from being selected at one stage as a parliamentary candidate.

The greatest achievements of Tony, along with the rest of the 47 councillors, came through the historic role of Liverpool city council between 1983 and 1987.

Through building a mass movement they confronted and defeated Thatcher's poverty programme for the city, and got back precious resources, stolen from the city in the whole preceding period.

They built homes, created new parks, sports centres and so on. A monument to the heroic 47 was created, and a resounding defeat on Thatcher was inflicted.

This would have been even greater if those left councils and leaders like Ken Livingstone, David Blunkett and the rest of them, had remained committed to the same road as Liverpool.

A national defeat could have been inflicted on the Tory government.

And let's remember, this took place in a city which in the past had been electorally under the sway of the Tories.

Up to 1964 they held most of the seats, despite the fighting industrial traditions.

If it had been left to the timid right wing of Labour that situation would have continued.

The swing toward the left in the Labour Party was orchestrated by a coalition of the left, in which Militant played a decisive role, with Tony, alongside many others.

This eventually led to us winning a thousand supporters on Merseyside.

This in itself would not have been sufficient to win the battle of Liverpool.

Our enemies tried everything to divide and weaken our movement, particularly the local press - which in the last few weeks have been fulsome in their praise of Tony!

This was not always the case, as Tony, Derek Hatton and the other 47 councillors stood their ground and carried out their programme despite the campaign of lies, misinformation and personal denigration.

Lennie McCluskey has described recently why Militant established such a powerful position:

"It is little wonder that the Militant Tendency received the reception that they did in Liverpool. Their reception on the doorstep never matched Neil Kinnock's lies.

"Many working people supported them because they were fed with cut after cut imposed by central government.

"The people of Liverpool wanted someone to stand up and fight on their behalf and during that period an enormous amount was done, including the building of beautiful, brick-built, semi-detached council homes with front and back gardens.

"To many in the city it is still remembered as the time when Labour defiantly stood for the communities it was meant to represent" ('In Defence of Liverpool', Tribune Autumn 2019).

Tony played a key role in this battle, as did Derek Hatton and many others.

It took unity of a movement, based on principled ideas, which achieved the victory over Thatcher.

But Tony possessed an enormously important quality which was important in this battle.

That was an unerring instinct to carry with us people who did not support everything we said, but joined in on the basis of an agreed programme.

Tony in particular showed incredible skill in the negotiations to consolidate the left within the District Labour Party.

Inevitably he, Derek Hatton and others came in for the vicious, terrible slander from the press, as we all did, including our newspaper, Militant.

Liverpool was maligned by the journals of capitalism, as the miners were.

The capitalist journals' motto was: 'Make it short, make it snappy and make it up!'

Tony and the 47 councillors faced unbelievable vitriol and hostility from the Labour right.

This was particularly the case from the organiser of Labour's defeat in 1992, Neil Kinnock.

When Tony and the 47 were removed from office, what was their crime?

Daring to stand by their class and their legitimate demands for the basics of human existence: a job, a home, decent social services, etc.

When he and many others were driven out of the council, and the shameful kangaroo court presided over by Kinnock then expelled him from the Labour Party, it was the immortal Liverpool workers that rallied to him and the other victims of the Tories in the city, who were slandered and in which the Labour right were complicit.

Yet when the councillors were fined, look at the incredible sums that were raised to pay off the fines, and in some cases save the homes of councillors.

The working class, with their sure instincts, rallied to the banner of the heroic 47!

And after Tony was removed, shamefully and scandalously, from the Labour Party, he remained an implacable and enthusiastic supporter of Militant.

However, in order to help his family, he went back to the tools as a printworker, a car worker, a taxi driver and, as he related to me, he picked up even some of the people who had attacked him and vilified him when he was a leader of the council.

He started his own printing business called 'Anteus Press'.

This did not prevent him from continuing to fight for his ideas, for the programme of Militant and the Socialist Party on whatever platform was offered.

In more recent years he stood as a mayoral candidate in Liverpool in which he raised the flag of socialism against Joe Anderson's implementation of the same kind of austerity programme which the Liverpool council in the 1980s had fought against.

However, there was an overwhelming desire, after decades of the Tories, for a Labour government to shield the working class from the avalanche of attacks.

Nevertheless Tony used the platform to raise the understanding of working people that we must not only oppose this system but all those who seek to perpetuate it.

And let me tell you this. If he had succeeded in this mayoral contest then the working class of this city would be in a much better place than it is today.

What kind of conditions are we going to bequeath to our children and their children?

It's clear that on the basis of capitalism unspeakable levels of poverty, much worse than on the eve of the socialist council in 1983, still exist.

Then there is a world now in which a half-crazed American president, Trump, almost similar to ancient Rome and despotic figures like Caligula, is running riot, having turned on the Kurds with the slaughtering of innocents.

And now he's joined by the 'Poundland-Trump', Boris Johnson.

But Tony Mulhearn left us an entirely different legacy of struggle, of solidarity and of socialism.

This will grow. Tony Mulhearn's legacy will not die but grow.

And when the working class takes real power, as they will, then people like Tony will be remembered even more.

I would like to conclude with a quote from Nikolai Ostrovsky:

"Man's dearest possession is life. It is given to him but once, and he must live it so as to feel no torturing regrets for wasted years, never know the burning shame of a mean and petty past; so live that, dying, he might say: all my life, all my strength were given to the finest cause in all the world ─ the fight for the liberation of mankind."

So we say farewell to our friend and comrade, loving father of the Mulhearn family.

And many here will recall the marvellous Maureen Mulhearn, an equal friend of all of us here today, and in her manner and approach a sublime human being, and of course all their children.

Tony, your battle is not complete until we replace the capitalist system with a more humane way of organising society, through democratic socialism.

We pledge to honour your memory and complete what you started by establishing a socialist world in which greed and selfishness will be eliminated.

We will then build a society of human solidarity, of democratic socialism.

In wishing the great Tony Mulhearn farewell we say simply: your memory and your lifelong battle goes on until victory.

Click here for an obituary, also by Peter Taaffe