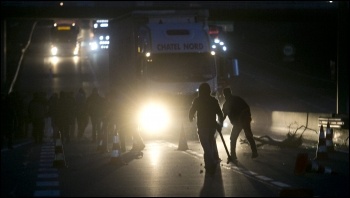 The container had come over from Zeebrugge in Belgium and its occupants appear to have been seeking to enter the UK. The driver of the lorry which picked up the container has been charged with their manslaughter and other offences, including conspiracy to traffic people, and there have been other arrests.

The victims are believed to be from Vietnam where families now face an agonising wait for news of their loved ones, as the process of identifying the bodies gets underway. 26-year-old Pham Thi Tra My is feared to be among the dead.

She sent messages to her family the evening before the tragedy was uncovered saying: "I am dying, I can't breathe." They have not heard from her since.

Families describe having paid up to £30,000 to people traffickers to try and ensure passage to Europe. This is an enormous sum of money, often meaning they took on large debts to pay for it. However, it was done in the hope that those travelling abroad could send money back to support the family. It is estimated that around 18,000 people a year are smuggled to Europe from Vietnam, mainly from poorer rural areas.

Sadly, these are not the first recorded deaths of people trying to enter the UK. In 2000, 58 Chinese people were found suffocated in the back of a lorry in Dover, and since then others have perished attempting the journey. However, these are just the tip of the iceberg for migrant deaths.

The United Nations estimates that 18,000 people have died crossing the Mediterranean since 2014. Search and rescue attempts have been scaled down in that time, and the EU parliament recently voted against increasing such life-saving efforts.

That people are willing to spend huge sums, and undergo arduous and risky journeys in the search of a better life shows the desperation to escape the war, terror or extreme poverty that capitalism brings to much of the world's population.

Among those signing the book of condolences for the dead in Essex was Boris Johnson. However, the policies of his government have helped create the conditions that led to the migrant crisis.

Capitalist politicians are mired in hypocrisy on the question of migration. While ordinary people are faced with desperate choices, entry to the UK is an entirely different matter for the super-rich. Those 'investing' at least £2 million in the country can get a 'tier-one' visa, allowing them to settle here for five years. The numbers buying a 'golden visa' in this way have hit a five-year high.

The bosses and their political representatives are happy to use migrant workers as a source of cheaper labour when they can. Giving some people 'illegal' status makes them easier to exploit.

At the same time migrants are used as a scapegoat. Capitalist politicians attempt to divide the working class, blaming immigration for the low pay and lack of jobs, housing and services that actually stem from austerity and the capitalist system they defend.

Some of the vitriol this division creates has been seen in disgusting and callous comments on stories about the 39 deaths on right-wing tabloid websites. The workers' movement must counter this division which serves the bosses and weakens us all, regardless of where we're from. All workers should be brought together in the unions to fight for equal and improved rights, terms and conditions at work.

The Socialist Party fights for the rights of migrant workers and links it to the fight for decent jobs and housing for all.

The capitalists' racist immigration laws must be opposed. Instead, decisions should be based on solidarity, not division, which can only be achieved through democratic workers' oversight. As part of the Committee for a Workers' International, we organise across the world to end the capitalist system and the horrors that drive people to undertake desperate journeys.