In recent issues of the Socialist, we have run a debate about how we can end low pay and what level of minimum wage we should be fighting for. In this issue Chris Parry, a taxi driver in Bristol, shares his thoughts. If you've got a view, email editors@socialistparty.org.uk 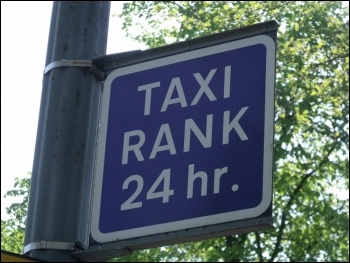 The main thing that I think was missing from the article 'Minimum wage debate: how can we end the scandal of low pay?' is how to address the dire situation facing millions of workers in the gig economy and those like me who have been pushed into the self-employment con trick.

As a taxi driver working a minimum 65-hour week, my net earnings a couple of weeks ago worked out at just £4.50 an hour, after paying fixed expenses which are £600 weekly. People like me get no overtime rate for night-time work, no unsocial hours increment and no bank holiday pay or annual leave.

Most of my expenses have to be paid whether I'm on the road or not. So, no holidays or even days off. Most weeks I have to work over the full seven days and try and fit my political work in! It's true that I get some better weeks (not a lot), but I constantly hear from the firm that hires me, that if I'm not available, then there's no guarantee of future work.

Recently I was called at 3.15am and told to get to Exeter airport to pick up passengers who'd had their flight diverted from Bristol. The sting in the tail was that if I wasn't quick, I'd lose the potential fare as another poor sod like me might get there first and collect it.

So I believe we need to seriously develop our programme for the millions of self-employed, gig economy and casual workers. We need to get out and unionise these workers. I was annoyed to hear John McDonnell talking about a 32-hour week so abstractly, as though everybody is already in a protected workplace having already been enjoying 35 hours. This is far, far from reality.

In Bristol property prices are ten times what they were 20 years ago and wages have fallen. McDonnell has to propose measures that tackle long hours and low pay in a manner that ordinary workers will relate to.

The demands sound great, but I know from bitter experience that in this period, unless we organise collectively to fight back, sweet politician promises will simply stay sweet soundbites.