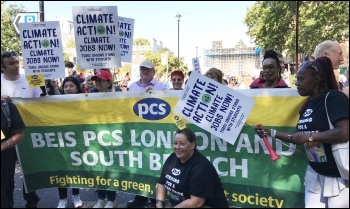 The election for the next general secretary of the 180,000-strong trade union runs from 7 November until 12 December.

We call upon activists to unite behind Marion's candidacy for a union democratically controlled through its elected lay structures, and a leadership which will actively coordinate across the union the fight on pay, jobs, pensions and office closures.

Marion has spent many years building the left and fighting the right wing in the union. She has a record of success in winning for members, including a successful fight which stopped the closure of her office.

Marion - currently PCS BEIS Group President and on the national executive committee, and who has been on the BEIS picket lines - said: "I'm immensely proud of my members and the branch reps. Two victories in a few weeks after these low-paid workers took indefinite strike action shows what can be achieved. It confirms that we can attract outsourced workers into PCS and link them with members who are directly employed, with the demand that these workers are brought in-house."

Marion stands on a programme of union democracy, breaking down barriers to win equality for all and a fresh, winning approach on pay, jobs and office closures.

Speaking to the Socialist, Marion says: "Unlike Mark Serwotka, who pledged to not take the full general secretary salary but does, I will stay on my civil service wage and publish details of the money I give back to PCS."

We call upon activists to unite behind her campaign and elect her as the next PCS general secretary.