London - 'autumn of discontent' against low pay and outsourcing 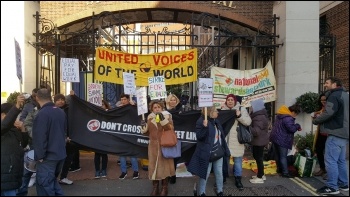 Independent union United Voices of the World (UVW) has launched an 'autumn of discontent' with strikes by outsourced, low-paid, mainly migrant workers.

There are strikes at five London employers - playground attendants at the Royal Parks, cafe workers in Greenwich University, hundreds of cleaners, caterers and porters from St. Mary's Hospital in Paddington, and workers at the Ministry of Justice and the headquarters of ITV and Channel 4.

They are coordinating their strikes on 31 October. Two others are balloting for action too - St. George's University and the University of East London. UVW has previously won important victories, including at the London School of Economics.

A central demand is for all outsourced workers to be brought in-house. This is the policy of Jeremy Corbyn and should be shouted from the rooftops as we inch towards a general election. This would draw a real class division between him and Boris Johnson, who wants to open the NHS and other public services to even more parasites, such as US private health companies.

Members of public sector union Unison in the North West have been on strike at NHS private contractor Compass. And food workers' union BFAWU are striking for £15 an hour at McDonalds.

This shows that established unions can also take action among precarious and contracted-out workers, providing they give a lead.

The planned national strike by 110,000 Communication Workers' Union (CWU) members in Royal Mail could highlight to a new generation of workers the role of fighting trade unions. It can be an attractive force to all those facing the bosses' offensive.