Youth clubs cuts are a mistake

The Thornhill Youth Centre in Southampton is being bulldozed to make way for unaffordable flats. Council-funded youth services ceased in the city in 2013. Since then, the Thornhill building leaser has struggled to cover rent.

The council, who own the building, have stepped in and sold the land to housing developers.

My mum, now in her late 50s, grew up in the area. She told me: "The youth club has always been a place for young people to hang out. We used to play badminton and table tennis there. It's sad to see all the facilities, which build community, being literally destroyed."

Josh, who was part of the 'save our youth services' campaign in 2012, told me: "When the council first voted to stop all funding for youth services, they said the services would be run by volunteers and stay open."

"We warned that volunteers and charities would be unable to maintain the services and the council would wait for them to be run down and sell the land for profit - which is exactly what has happened!"

A few weeks ago, city leaders initiated controversial Section 60 stop-and-search powers following a serious knife incident less than a mile from the youth club. It's no surprise to residents that the lack of youth facilities is making communities less safe, particularly for young people. 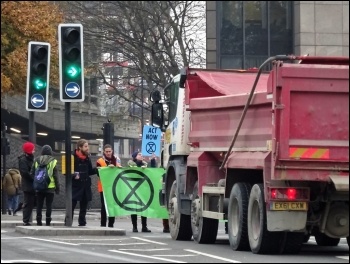 Claire Wilkins' article in issue 1061 was spot on and showed graphically how out of touch with reality the leaders of Extinction Rebellion (XR) are. (See 'Extinction Rebellion action opens up divisions on how to stop climate change' at socialistparty.org.uk).

Public transport is part of the solution to climate change. But XR take the position that because buses or trains produce some carbon emissions, then they are as bad as cars.

Huge cuts in subsidies have caused routes to be axed. This means that workers in rural areas must own a car or become a prisoner in their own community.

Extinction Rebellion should campaign for policies such as massive public investment and public ownership of transport. Socialists are correct to campaign for these polices in the environmental movement.

Homeless problem is an abomination

A tent encampment is just across the road from the Stratford Westfield shopping centre, east London, and adjacent to new high rise block flats for the super-rich. An abomination!

We need a mass council house building programme and rent control in Newham and everywhere. Not fake 'affordable', but genuinely, for the working class and poor.

And no more of Labour-run councils putting humans in containers or converted tiny office space in soulless buildings. Or shipping the homeless out of London, as Newham council did.

There are plenty of empty homes and buildings that can be refurbished in Newham and elsewhere that councils should turn into quality homes.