Link to this page: https://www.socialistparty.org.uk/articles/29804 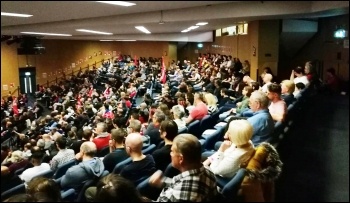 "Socialism 2019 will be the biggest socialist general election preparation event there is. We will be preparing to go out and fight for anti-austerity policies - but also for what comes after.

"We believe Jeremy Corbyn can win with bold socialist policies that point to the end of: food bank usage, homelessness, cuts to our public services and NHS, tuition fees, privatisation and all the pain of austerity.

"Socialism 2019 will prepare to fight to defend an anti-austerity government against the attempts to sabotage it by all its enemies in the Tories - but also among the Blairites - like those who didn't vote for the general election.

"The highlight of the weekend will be the Saturday night rally where we will bring everyone together - from the leaders of the Militant Tendency and the Socialist Party, to student and trade union leaders, to climate strikers, postal workers about to strike and hundreds of trade union, socialist and community campaigners, this will be a rally that brings together the best and most determined fighters for a socialist alternative to Tory misery and capitalist crisis.

"We will also use the rally to celebrate the life of Tony Mulhearn, a socialist leader in Liverpool when the city council under the leadership of Militant defeated Thatcher in the 1980s.

"The full schedule of workshops includes discussion on all the major issues we face in this election and beyond. From Brexit to environmental crisis, from the fight against sexism to the development of artificial intelligence, we will discuss the big questions of today."

For reports and video clips about the Socialist Party: www.socialistparty.org.uk