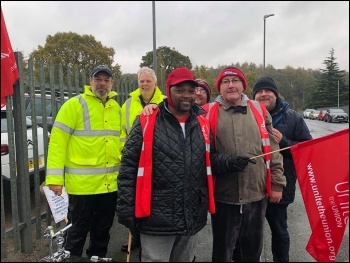 The strike at Forbo Flooring UK in Ripley Derbyshire has entered its third week. The strike by over 70 production workers follows seven months of fruitless and frustrating negotiations with the Swiss-based company.

The workers rejected a paltry 2.1% pay offer and voted for strike action, which began on 15 October.

The workers are striking every Tuesday and Wednesday which means that production has been reduced by around 40%. The union, Unite, is also concerned about allegations of bullying and harassment by management in the workplace.

Forbo have factories in several countries in Europe as well as in Russia and the USA. The UK factory is profitable (£9 million last year) and there was a further investment in productive capacity of £4.1 million in January of this year.