Link to this page: https://www.socialistparty.org.uk/articles/29850 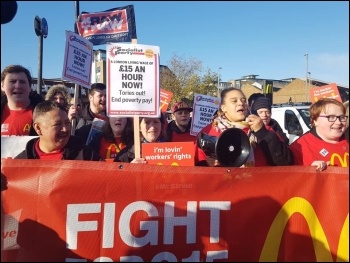 'McStrikers', mainly young workers, are taking on the second biggest employer in the world, demanding £15 an hour.

Strikers from six south London McDonald's restaurants protested in Wandsworth on the morning of Tuesday, 12 November, and then at Downing Street in freezing rain at lunchtime.

Rob Williams spoke to give solidarity from the National Shop Stewards Network.

Striker Melissa declared: "We've had enough! - of choosing between paying the gas or buying food. Of not being able to buy new shoes for work".

The BFAWU bakers' union said that these brave workers are standing up for low paid and zero hour contract workers across the country.

John McDonnell spoke and pledged support for their £15 an hour claim.