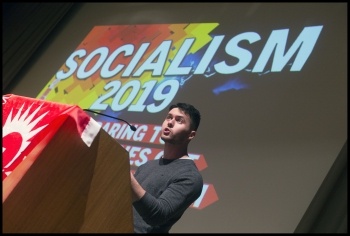 This was the question posed by Theo Sharieff, national chair of Socialist Students, to a packed rally at Socialism 2019 on 2 November. (see also 'Elections, strikes and revolutions').

Theo graphically explained that it would be a world "where young workers pay over half of their wages, sometimes as much as 70% of their pay, straight into the pocket of the landlord. A world where young people work on demand at the snap of the fingers of the bosses through zero-hour contracts. A world where you leave university with the knowledge that you may be forced to work until you're 75."

But as Theo explained, the Tories are far from satisfied with making students pay thousands a year for an education. "Already the ground has been prepared for a new raft of attacks which could provoke a new revolt over the question of free education.

"They include lowering the income threshold for the repayment of student debt and extending the repayment period from 30 to 40 years. It's a plan to shackle even lower paid graduates in a lifetime of debt."

Of course, it's not only the Tories leading to a bleak future for the majority of young people, it's the system they represent - capitalism.

"Young people know instinctively that something is deeply wrong with the way society is organised. Since last year we've witnessed an almost spontaneous explosion in the streets when tens of thousands of school and college students moved into action in the monthly climate strikes."

Those walkouts demanded 'system change to end climate change'. But many students were also demanding action on much more. "They are struggling for a future worth living. It's the same the world over - Chile, Lebanon, Iraq - the 'children of the financial' crash, as the Guardian put it, are taking to the streets", said Theo

He continued: "The Socialist Party and Socialist Students have fought vociferously within the climate strike movement to win a new generation of activists to the ideas of socialism and Marxism, not for one moment dipping the banner of revolutionary ideas and action.

"And on the campuses, Socialist Students is the only national organisation which points students clearly in the direction of revolutionary ideas.

"We've built Socialist Students groups on the campuses across the country, the only national organisation holding the line in the fight for free education, for decent student housing, for an end to austerity on campus.

"And that means we're ready for this election. We're ready to launch a socialist voter registration drive on campus, linked to the fight for a Corbyn government with a socialist programme. A government which will abolish tuition fees, cancel student debt, reintroduce living grants and guarantee for students a decent job and a home after university.

"We're ready to campaign, demonstrate, occupy for those policies. We're ready to organise joint students', and workers', meetings on the campuses with UCU (university and college workers) and CWU (postal) workers who are preparing for national strike action in the face of a crumbling Tory government.

"These are aspects of our socialist general election campaign on campuses which we'll be discussing at the Socialist Students national conference in Birmingham on 30 November.

"We want to build a powerful student movement, fused with the even more powerful workers' movement to get rid of the Tories, and get rid of them once and for all. To build a movement which will abolish capitalism, and for a new generation, translating socialism into the language of free education, jobs, homes, services, and a future worth living."