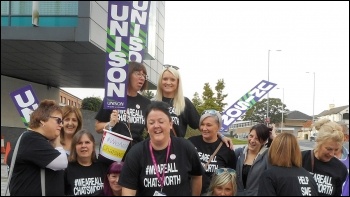 Two years on from the 'done deal, you will be closing' announcement, the Chatsworth Ward at Mansfield Community Hospital remains open!

In July 2017, management told workers at the neuro-rehabilitation ward it would close that October. Horrified staff demanded to know what provisions were being made for their very vulnerable patients.

They were told not to worry because they would be relocated to different jobs. They weren't primarily concerned that they wouldn't have a job, but that their patients' needs had been ignored.

There was desperation and bewilderment, but the anger and mood to fight was tangible. This was initially ignored by the leadership of the local branch of public service union Unison and the Labour Party - although both eventually supported the campaign after the workers won huge community support.

Staff looked for leadership to fight this savage announcement. Luckily, a Socialist Party member worked on the ward.

Quick and decisive moves were made, such as contacting the media and forming a workers' and patients' committee. A march took place in early September. Weekly meetings ensured tactics and strategies were democratically discussed.

We stressed that this was not just a local issue, but linked to the wider crisis in the NHS. The team did not wish to save Chatsworth Ward at the expense of other NHS services, but to fight for them all. So we linked up with other NHS campaigns, such as Save Glenfield Children's Heart Centre in Leicester.

After seven months of heroic struggle, the bosses finally caved in and announced Chatsworth would not close. Many patients and their families have benefited since then from its specialist care.

The campaign highlighted that with bold leadership, workers' confidence increased. They were prepared to fight, and also drew conclusions about this rotten capitalist system.

The ward workers developed politically - but of course, the bosses have learned too. So no one is under any illusion that the war is won - only that battle.

This lousy Tory government is hell-bent on destroying our NHS so their big business friends can line their pockets. They have to go. Let's get Corbyn in and organise trade union action for socialist policies.