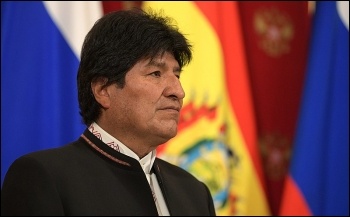 A right-wing, US-backed attempt to overthrow the Movement for Socialism (MAS) government in Bolivia, and to replace it with a vicious anti-working class regime, is under way.

Evo Morales, South America's first indigenous national president, resigned on 11 November and fled to Mexico, where he's been granted political asylum. His departure came after the country's chief of the armed forces urged him to stand down in "the interests of peace and stability". In a televised statement, Morales had earlier denounced the "coup" against him and his MAS government.

This followed what was, in effect, a police mutiny in several parts of the country starting on Friday 8 November, when police officers refused to leave their barracks. Rank-and-file police and military joined opposition protests.

It was clear that Morales had lost control of crucial parts of the state machine. At the same time, violent anti-government protests took place. Outrageously, the leadership of the main trade union, Central Obrera Boliviana, also called for Morales to stand down to "avoid bloodshed".

The coup provoked street protests in the capital, La Paz, and in El Alto. The military has been deployed on the streets.

It is not clear yet whether these protests will grow and spread and act as a serious challenge to the right-wing coup consolidating its power. If there is momentum, mass resistance should be linked to a revolutionary struggle against capitalist reaction, making a class appeal to the rank and file of the soldiers and police, and for socialist change.

The right-wing opposition used the outcome of the 20 October presidential elections, which saw Morales secure a fourth term, to mount street protests.

Recently revealed audio recordings of discussions, ahead of the elections, involving Bolivian opposition politicians and US senators, indicated they were making plans to organise disruption.

Morales was re-elected in the first round with 47.08% of the vote. Mesa got 36.5%. The opposition claimed fraud after the electoral commission decided to freeze updates of the election count for nearly a day.

When updates resumed, Morales had gained on his lead, allowing him to hold onto office without needing to go to a second-round vote. MAS supporters pointed out that the countryside, which takes longest to count the vote, has always strongly returned higher support for Morales.

Nevertheless, a failed attempt by Morales, in 2016, to use a referendum to change the 2009 constitution to allow him to run for a fourth term in office, which was later overturned by the supreme court that ruled term limits infringed human rights, fed into widespread concerns over the 20 October vote.

As anti-government protesters from several parts of Bolivia made their way to La Paz, on 2-3 November, the US-dominated Organisation of American States (OAS) claimed "irregularities" in the election and vote counting and called for a new vote. This was a big blow to Morales, who had called on all parties to await and respect the OAS findings (which the opposition had said they would ignore if they did not go their way).

Morales was in power for 14 years, winning three presidential elections on the back of "nearly halving poverty rates and a quadrupling of gross domestic product, due to gas and mineral exports," according to the Financial Times. Access to clean air and water was made a legal right.

The Bolivian masses long struggled against neoliberalism. Semi-insurrectionary movements, known as the 'Gas Wars', took place in 2003 and 2005.

The protesters demanded the expulsion of the multinational gas and mining corporations, the ending of the big landowner system and a revolutionary constituent assembly.

This militant movement saw a succession of neoliberal presidents forced out of office and opened the way for Morales and the MAS government to come to power. They carried out the partial nationalisation of the gas industry and introduced subsidies for the poor and social programmes.

This enabled Morales to win landslide election victories, and the MAS to gain control over both branches of Congress.

Yet the lives of many workers and poor did not fundamentally improve as they had hoped.

Inflation often wiped out subsidies for the poor and workers' wage increases. The large landowners maintained their monopoly over the land. The multinationals, including the oil and mining companies, continued making huge profits.

During Morales' third term in office he faced many of the problems associated with a reformist programme, as growth slowed, public debt soared, and foreign exchange reserves almost halved due to a high fixed exchange rate against the dollar.

Yet the MAS government was still an affront to Bolivia's elite and US imperialism. "My sin is to be indigenous, a trade unionist and a coca grower...", Morales commented during his resignation speech.

The forces of reaction demanded concession after concession from the government while biding their time to overthrow Morales.

Despite the threat from the right, the MAS government adopted an increasingly conciliatory approach towards the corporations, big landowners, and ruling class. This eroded support from the working class and the poor.

The huge wave of enthusiasm that brought the MAS government to power has been steadily declining. Morales won over 63% of the vote in the 2014 election; in October 2019 his vote fell to 47%.

The right-wing opposition eagerly exploited the situation. In Santa Cruz (the largest city), since the 20 October elections, hard-right leader, Luis Fernando Camacho, of the Comité pro-Santa Cruz - "a group with roots in the department's elite that now claims to represent everyone" (The Economist, 7/11/19) - organised street barricades and "strikes" to bring down Morales.

If a new right-wing regime is able to consolidate itself, all the social gains that are left of the years of Morales' rule are in serious jeopardy, as well as the lives and liberty of many left activists and trade unionists.

Workers and the indigenous people will face vicious attacks on their rights and living standards. This will be a boost for right-wing forces throughout Latin America, including the capitalist opposition in Venezuela.

But it will not be a stable situation. The class and ethnic base of the right-wing opens the way to the possibility of deep conflict.

Socialists and workers everywhere must oppose this US imperialist-backed coup with solidarity actions.

We also need to draw the necessary lessons. Piecemeal actions taken against the rule of oligarchs and big landowners will not satisfy the needs of the masses and will earn the ire of reaction.

But a workers' government taking the rich natural resources of Bolivia into public ownership, along with the large landed estates, democratically planned and man-aged by the working class, will fundamentally transform society, and act as a spur to similar socialist change throughout the continent.