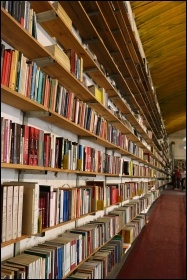 A fight is on to keep the National Poetry Library free to join and use by the public. The library at the Southbank Centre, London contains the largest public collection of modern poetry in the world.

A few weeks ago, senior management announced it was planning to introduce a fee of over £30 a year for all new members, with "enhanced" library use compared to current members.

This resulted in a storm of protest on social media from many of the 9,000 library members, and over 2,000 people signed an online petition.

Management hastily retreated and instead invited members to attend workshops to 'consult' about ways to ensure the future of the institution.

At the workshop I attended on 11 November, the 'options' included another form of paid membership, seeking corporate sponsorship or asking the better-off to make donations.

As someone who became a member 20 years ago while living in a nearby housing association flat, regularly bringing my two young children to the library, I strongly opposed management's creeping privatisation plans.

Arts Council cuts have, in all likelihood, caused funding shortfalls at the library. But managers indicated the way to resolve problems was by introducing the sort of commercialisation seen elsewhere at the Southbank Centre, where many facilities are contracted out to private business.

Any paid or two-tier memberships will be a barrier to many working-class people joining the library, and only add to any existing perceptions of elitism.

Stopping commercialisation, and fighting for adequate public funding, alongside safeguarding library workers' terms and conditions, is the only acceptable option.