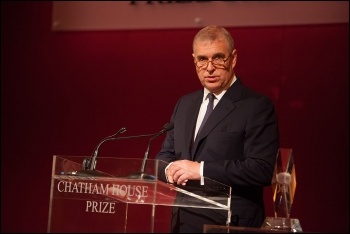 The queen's son gave a disastrous interview to BBC Newsnight on his relationship with the late financier and convicted paedophile Jeffrey Epstein. Condescending. Inconsistent. Riddled with bizarre and unconvincing deflections meant to discredit his own accuser's claims.

But the only victims the Duke of York seemed to recognise were Epstein and himself! Of course, Epstein's years of predation on children were "unbecoming." And Andrew had "let the side down" by going to stay with him for four days when the truth got out. But after all, wasn't that just Andrew being "too honourable"?

What of the victims of Epstein's abuse? The witless prince says almost nothing on this. Instead, he lifts the veil on a tight-knit world of old boys' networks and drawing-room cover-ups.

Rape and sexual exploitation are a chronic disease in capitalist society. They afflict all walks of life, but arise from social systems built on inequality, and the oppression necessary to maintain a privileged elite in power.

Prince Andrew is a royal, so might as well have been raised on the moon. His incompetence in addressing the real world is plain. But that's not why he acts like he's above the law - it's because in some ways, he is.

Earlier paedophile-ring exposés have counted politicians, executives, police chiefs, judges, and other such grandees among their charges. There are no democratic routes to challenge the power of the vast majority in the capitalist establishment.

But from parliament to the media to the judiciary and beyond, economic crisis has exposed every institution of British capitalism, like the rotting wooden pylons of a pier at low tide. The prince's outrageous conduct will add to the bosses' difficulties in finding mass support for their programme of misery and theft.

The Socialist Party campaigns against sexism and abuse in every form. Andrew and the rest must face investigation.

But we also fight for democratic, working-class control in all spheres of life, including policing, the media and the courts. Abolish the monarchy! For the election of judges! And nationalise the land, banks and big companies whose fat profits keep the royals and their super-rich chums out of reach!