Plymouth Blairites use Tory policies to side with anti-tenant landlords 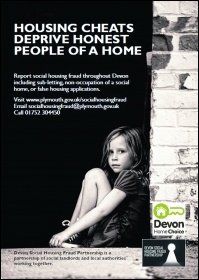 This poster, aimed at hounding tenants, was pinned up at the children's social work HQ of Plymouth's Blairite Labour council   (Click to enlarge)

But this poster, pinned up at the children's social work HQ for Plymouth Council, shows Tory philosophy dictates the actions of Labour-run local authorities.

Plymouth is run by a tight-knit cabal of Labour right-wing career politicians. This poster says they have no qualms about hounding tenants.

The idea of fighting the bedroom tax, benefit cap, two-children benefit cut-off, harassment of sick and disabled people with 'fitness to work' tests, Universal Credit or actually building council houses is foreign to these class traitors.

Social workers employed by Plymouth Council are clearly expected to destroy any relationship they have with families in need by reporting 'suspected fraud'.

Nothing could demonstrate more clearly that the stance towards struggling families is informed by old, cruel, self-serving, divide-and-rule ideas - 'deserving' and 'undeserving' poor, or that poverty is the sufferer's fault or a 'lifestyle choice'.

If a Corbyn-led government is elected, the rotten right-wing in Plymouth Labour Party will have to be removed before people feel any benefit.