Link to this page: https://www.socialistparty.org.uk/articles/29958 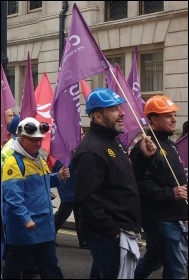 Tata Steel workers marching in 2016 to save their jobs, photo Scott Jones   (Click to enlarge)

Steel unions must fight for every job!

Tata Steel has given steel workers the worst possible Xmas message: 1,000 jobs to be axed across the UK. The huge Port Talbot steel-making plant, employing 4,000 workers, almost half of its UK workforce, is expected to be hardest hit.

While Tata has yet to announce the exact location of this jobs massacre, it claims that two-thirds of job losses will come from management and office based roles.

There must be no bending to any attempt at dividing white collar and blue collar workers. The steel trade unions must fight for every job, to stop this conscious run down of Tata's UK operations.

When the proposed merger between Tata and Thyssenkrup fell through earlier this year it was clear, as the Socialist warned, that Tata's empty promises to 'seek' to avoid compulsory redundancies, and a planned investment of £1 billion over ten years, would be dependent on 'market conditions'.

Tata's decision to slash jobs is blamed on difficult conditions in the 'severe' international steel market.

As in 2016/17 the future of steel making in Port Talbot is again on the agenda. Whinging complaints from trade union leaders and politicians that they haven't been consulted or informed where the proposed cuts will be taking place are totally inadequate in the coming battle for the 4,000 workers at Port Talbot and the 15,000 reliant jobs in the supply chain.

Unions need to convene an emergency conference of shop stewards across Tata to plan a united campaign to stop this further run down of the workforce.

Instead of shedding endless crocodile tears, the local Blairite Labour MP, Stephen Kinnock, should be demanding that the Labour-led Welsh government and a future Corbyn government should now end the uncertainty surrounding the UK steel industry by pledging to nationalise, under democratic workers' control, and management, the steel-making plant in Port Talbot along with the other Tata facilities across the UK.

Jeremy Corbyn should immediately meet with the workforce, particularly in Port Talbot, promising that a Labour government led by him will nationalise the company.