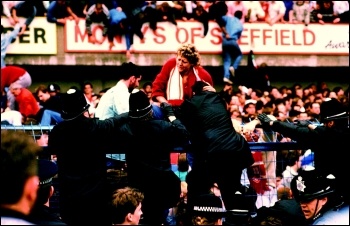 In a second trial against David Duckenfield, after the first jury failed to reach a verdict, the former match commander stood accused of gross negligence manslaughter of 95 Liverpool fans in the Hillsborough football stadium disaster in 1989. Under the law at the time, the 96th victim, Tony Bland, was not included in the charge because he died more than a year and a day afterwards.

This time Duckenfield was cleared by a majority decision.

I wrote a piece for the Socialist after the first trial and made the point that Duckenfield's defence was that there were many failings on the day made by other agencies that were outside his control. But this begs the question; why didn't he say this 30 years ago?

Instead, he lied by saying the fans had caused the disaster by forcing open the gates, and he went along with a gigantic cover-up lasting 25 years, that accused the fans of drunkenness, thuggery and violence which impeded police efforts.

The cover-up and lies magnified the pain for grieving families and friends and stigmatised the people of Liverpool for many years as vicious, drunken thugs. The disaster was a result of gross negligence and incompetence, but the cover-up was carefully planned and contrived and was arguably the greater crime.

An inquest jury in 2016 found that 96 fans were unlawfully killed, and cleared Liverpool fans of any blame; only then did Duckenfield's story change.

The victims' families and the Hillsborough Justice Campaign fought long and hard to establish the truth. But despite their achievements, the British justice system shows once again it is incapable of delivering justice for working-class people.