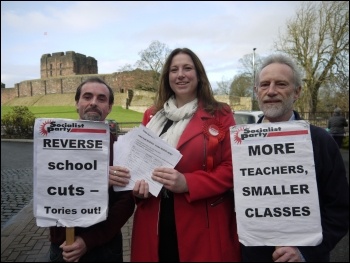 The Labour candidate for Carlisle, Ruth Alcroft, spoke at a Socialist Party public election meeting in the city on 2 December. It followed the handing over of a petition to her from 500 local parents and teachers against the Tory cuts to school funding. The signatures had been collected by us on regular city centre campaign stalls this autumn.

Ruth said: "I am proud of the Labour manifesto for education. We have committed not only to properly funding schools, not only to removing the stress of SATs and Ofsted to focus on delivering education that is meaningful to each student and trusts teachers, not only to keeping class sizes below 30 throughout primary school, but also to 'poverty proofing' schools, introducing free school meals for all primary school students, encouraging breakfast clubs and tackling the cost of school uniforms."

Martin Powell-Davies, a member of the teachers' union NEU and the Socialist Party, offered an alternative to the schools crisis. "We need 15,000 more teachers immediately and more to bring class sizes down.

We should scrap student fees and restore the grant for uni and FE students. We should replace academies, grammar and public schools with a comprehensive education system under the democratic control of parents, teachers, students and the local community. After a decade of sacrifice by our kids it's time to make the mega-rich and corporations pay."

Don't assume that your child will benefit from the Tory election giveaway. The Education Policy Institute has discovered that most of this money will go to schools in wealthier areas, while those with already 'disadvantaged' (working-class) children will miss out. England's 163 grammar schools will be given an average extra £130,000 each.

And how about this for class prejudice and buttering up your core voters: 93% of the schools receiving more than £100 per pupil extra are in Tory strongholds! They will get an average £116 per non-disadvantaged pupil, while schools with those eligible for free school meals will only get another £56.

We want sufficient resources for all children, students and trainees to get the academic, vocational and life education they want. The first step to that is to get the Tories out and let Corbyn build his National Education Service.