Link to this page: https://www.socialistparty.org.uk/articles/30018 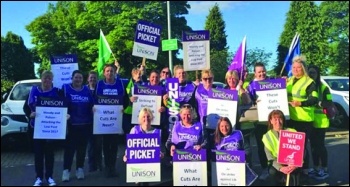 Boris Johnson and the Tories' election victory will have angered and disappointed many workers and young people. He may have been elected promising 'an end to austerity' and to serve the 'nation', but in truth Johnson will rule for the billionaires and the interests of big business from day one.

Workers' rights, the NHS, the environment, benefits and wages will come under attack. But the real power in society is not Johnson.

A postal workers' national strike is still possible and the real anti-working class character of a Johnson government will become clear in the months ahead.

It is bitterly divided, and Johnson has only been able to win by distancing himself from his own party, using populist rhetoric to falsely claim he is standing up for 'the people'.

This was a 'snapshot', a very ephemeral result, with even Johnson having to acknowledge workers had only lent him their votes."

"It was the compromises that the Labour leadership made with the Blairites that are the central reason for this defeat, above all on Brexit. Swathes of working-class leave-voting areas saw Labour as a 'Remain' party."

As Dominic Lawson wrote in the Sunday Times last week: "It is the centrists, supported by the former Labour leader Tony Blair and his erstwhile spin-doctor Alistair Campbell, who dragged the party from its policy of respecting the result of the 2016 referendum.

"As the Socialist Party has consistently argued, the working-class vote for Brexit was a cry of rage against everything they had suffered in a decade of austerity.

"Had Corbyn, as we did, taken a different position in the EU referendum the right-wing Tory nationalists would not have had the space to dominate the Brexit campaign in the way they did.

"He should have argued in 2016 for a vote for Brexit on the grounds of opposing the EU bosses' club - with its pro-privatisation and anti-working laws, standing instead for a new collaboration of the peoples' of Europe on a socialist basis.

"Corbyn's neutrality, combined with months of seeming to collaborate in parliament with pro-capitalist Remainers - Jo Swinson, Ken Clarke, and co - allowed Johnson to claim he was the only candidate who could 'get Brexit done' ".

Many Labour Leave voters also did not vote in this election for the same reason; disappointment in Labour's position on Brexit and Corbyn's continual concessions to the right wing of his own party.

In reality, the over 10 million people who voted Labour - a higher vote than was won by Ed Miliband in 2015 and Gordon Brown in 2010 and Tony Blair in 2005 - were enthused by Corbyn's manifesto.

If the Blarities had written Labour's manifesto, the defeat suffered would have been far, far greater. This, of course, has not stopped the Labour right, backed up by the media, from immediately demanding Labour be turned back into a party safe for the interests of big business.

Arch-Blairite MP Ian Murray, Labour's only Scottish MP, demanded after the result: "Not only does Mr Corbyn have to go but the policy and the ideology has to go too."

Labour in Scotland and across the UK has to be established as a genuine workers' party. The Blairite saboteurs must be removed along with any councillor, MP and MSP who votes for cuts and opposes Corbyn's manifesto.

As a first step, a labour movement conference of the trade unions, socialist organisations and the Labour left should be convened to discuss re-founding Labour as a fighting workers' organisation. If this is not done, then it's clear that a new workers' party will have to be built in Scotland and indeed across Britain.

It's inevitable that, given the result, support for independence will grow significantly in the coming weeks and months.

With a Tory government at Westminster and with the pro-capitalist SNP winning 48 of the 59 available seats on a commitment of demanding an 'indyref 2', the scene is set for a major explosion in the national question.

As Socialist Party Scotland said in our election leaflet: "In Scotland, many workers and young people will vote SNP hoping that independence can offer an escape route from austerity and cuts. Corbyn's lack of a fighting lead over the last two years has meant the positive aspects of his radical programme have not been heard. Labour in Scotland are still widely perceived as 'anti-independence."

The SNP's manifesto was significantly to the right of Labour's. Indeed SNP politicians regularly joined the chorus of attacks on Corbyn by the Blairite right and the capitalist press during the election campaign. Their dual policy of 'Stop Brexit' while also seeking a mandate for a second independence referendum had an impact.

The SNP leadership, because they defend capitalism, are organically opposed to such methods. They naively believe that an agreement could be made with a Johnson government that would allow a 'legal' referendum to take place.

The above article was first posted online on the website of Socialist Party Scotland under the title: After the election - Socialist policies and workers' action can stop the Tories.