Link to this page: https://www.socialistparty.org.uk/articles/30047 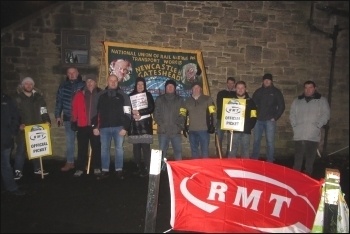 RMT union drivers on the Tyne & Wear metro took the drastic step of holding a 48-hour strike on the Friday and Saturday before Christmas.

Socialist Party members joined the well-attended 5am picket on Friday morning. We spoke with RMT shop steward and 'super picket' (picket supervisor) Chris Mongan, who has been part of the negotiations. Chris told us:

"The management are claiming they have made an offer of a 15% pay rise, but no formal offer has been made".

However, it's not the money aspect of the negotiations that is the cause of the strike. It is the conditions attached by the bosses, Nexus, or rather the conditions they expect the drivers to give up, that's the main issue. Chris told us:

"Nexus wants us to give maximum flexibility over our rest days. They could be changed or cancelled at short notice to provide cover for the likes of special events, introduction of new rolling stock, etc.

"This would destroy any work/life balance and make it impossible to plan ahead for holidays, childcare, etc. Whatever increase we get and more would be swallowed up by increased childcare costs alone."

The anger and determination of the drivers is shown by the fact that the vote for strike action was 100%.

RMT regional organiser, Micky Thompson, in the local press, stated: "Do you think I'm mad enough to reject a 15% pay increase on behalf of my members? This is not a pay award, it is self-financed scheme in which our terms and conditions are being traded to generate a return."

The Socialist Party offers full support to the RMT drivers on the metro and other RMT members taking action in disputes around the country at this time.