Another year and yet another potential war due to Donald Trump's foreign policy of assassinating his administration's political opponents. And while his latest provocative act of vapourising Iran's general Qassim Suleimani and others on Iraq territory threatens to ignite a new conflict in a war-stricken Middle East, its consequences are likely to be felt throughout the world.

Robert Bechert of the Committee for a Workers' International (CWI - the socialist international organisation to which the Socialist Party is affiliated) analyses this major ratcheting-up of the US-Iran conflict and explains why a united movement of the working class against imperialism and the regional powers is the only long-term solution to war and poverty. 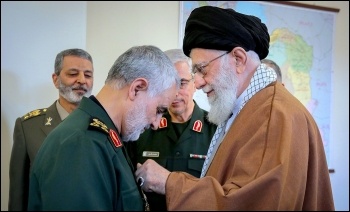 Shockwaves went around the world, and outrage spread in the Middle East, when news broke of Trump's unilateral decision to assassinate Qassem Suleimani, commander of the Iranian Revolutionary Guards' Quds force and a key Iranian leader.

Suleimani had a legendary status, particularly among Shias in the Middle East, because of the key role he played in resisting Isis. He was a labourer's son who rose to lead the Quds Force but, at the same time, was instrumental in suppressing workers' and opposition movements. Among those killed alongside Suleimani was Abu Mahdi al-Muhnadis, an important leader of the Shia militias that are now integrated into Iraqi military forces.

Suleimani was a key player in building Iran's regional position. His assassination will not go unanswered by the Iranian regime, although what it actually does may not be immediately clear.

It is widely seen as the most significant event in the Middle East since the 2003 US/British-led invasion of Iraq because of its potential impact. It represents an attempt to overturn one of that invasion's key results, the strengthening of Iran's regional power - something which the invasion's architects totally failed to foresee.

Trump's goal is to try to reverse Iran's position but, at the same time, avoid another ground war. However, these killings could further destabilise the whole region and lead to further wars.

For a time, the words "Franz Ferdinand" and "World War Three" trended on Twitter, reflecting fears that this assassination could trigger a war in the same way that the 1914 Sarajevo killing did.

While a world war is not posed, more regional conflicts, which would heap more misery on the peoples of the Middle East and possibly further afield, are probable.

Trump's unilateral action shocked the US's allies. They were all kept completely in the dark, unlike at least two Republican US Senators who were told of the assassination decision a few days before. It bore all the hallmarks of a gangster ordering the 'taking out' of an opponent.

But the potential consequences of this are far wider and more destabilising than a gangland killing; this is the deep fear of many sections of the ruling classes in the US and elsewhere.

For the European powers this action is seen as a further step in Trump's assault on the previous policy of attempting to reach some kind of agreement with Iran, as was his withdrawal from the 2015 Iran nuclear deal, and the imposition of sanctions.

In ordering this assassination, Trump is making a high-stakes gamble in an unstable region where most of the regimes are either currently facing opposition movements or fear that they will.

Obviously, this year's US presidential election was a factor in Trump's decision. The death of a US 'defence contractor' in Iraq was a trigger, along with the attempt of protesters to get into the US embassy in Baghdad. Trump did not want to risk a repeat of either the 1979-81 Tehran embassy hostage crisis that led to Jimmy Carter's 1980 election defeat or the 2012 killing of the US Ambassador to Libya.

Trump wanted to give a warning to the Iranian regime, and ordered, in his own words, Suleimani's "termination". This was something two of his predecessors - George W Bush and Obama - considered but rejected because of fears of the repercussions.

There is also speculation that this is an attempt by Trump to divert attention away from his impending impeachment trial, similar to the bombing of Iraq that the then President Clinton ordered in 1998 just before the House of Representatives was due to vote on his impeachment.

Both within the US and among the other western imperialist powers, there are real fears that this action has not been thought through and will open up a Pandora's Box of retaliation, upheavals and war.

There is no objection to the assassination, as such, but as a New York Times editorial put it: "The real question to ask about the American drone attack that killed Maj. Gen. Qassim Suleimani was not whether it was justified, but whether it was wise."

Reflecting the fears of a section of the US ruling class that the situation could spiral into widespread conflicts, a former US deputy assistant secretary of defence for the Middle East, Andrew Exum, wrote: "This doesn't mean war, it will not lead to war, and it doesn't risk war. None of that. It is war"!

These serious doubts and disagreements within the ruling classes reflect the real situation on the ground. While it is not clear where it will lead, the possibility of destabilising conflicts has massively increased. Trump himself attempted to defuse these fears by claiming that Suleimani's assassination was to "stop a war", but there is no guarantee of that.

Immediately there will be repercussions in Iraq. The Iraqi government has been facing a renewed wave of mass protests since October and, after resigning last November, is now technically just a caretaker administration.

It immediately protested about the Baghdad airport assassinations - carried out without its prior knowledge or approval - and sought to rally popular support against this unilateral US action.

The Iraq parliament voted to expel US military forces from its territory, but that vote is subject to approval by the Iraqi government and the government is obliged to give the US one year to withdraw.

In his attempts to justify his decision, Trump opportunistically tried to exploit the military attempts to brutally suppress last year's protests in both Iraq and in Iran.

Suleimani's key role in organising the counter-measures against the recent movements in Iran, Iraq and Lebanon means he had blood on his hands. Trump hopes this, and Muhnadis' role in Iraq, will help limit anger at their assassination. This is especially so in Iraq, where some of the targets of popular anger were Iranian institutions since the Iranian regime is seen as backing an unpopular government.

However, the appeal of Trump's hypocritical criticism could be limited by anger at the US's own regional role, including in Iran itself. Trump's repeated threat to destroy Iranian cultural sites will not win popular support.

Since the 2003 invasion there has also been bitter opposition in Iraq to US power. The likelihood is that, at least immediately, Iraqi anger will centre on the US rather than against Iran. Although, significantly, in recent days there have been Iraqi protests denouncing both Iran and the US as "occupiers".

Internationally these assassinations are also another warning to the working class and oppressed. Repeatedly the ruling classes speak about the need to obey the 'rule of law' when they move to limit and suppress opposition movements whether it be strikes or protests. But this does not apply to actions the ruling classes themselves take.

Historically the US, like other states, has carried out, or attempted, assassinations. In 1975, a US Senate committee investigated a series of clandestine CIA assassination attempts, including that of Patrice Lumumba in the Congo and of Cuba's Fidel Castro.

For a brief time this policy was halted. But what is new is that Suleimani was openly killed with a minimal attempt to justify it.

None of the US's allies have, so far, condemned the Trump administration for summarily executing opponents with no 'legal' justification, apart from the unproven claim that this was in "self-defence". Indeed, similar tactics are used by other governments around the world, often under the claim of 'fighting terrorism' or 'crime'.

Mass repression was used in Sudan and Iraq, last year, to try to suppress mass movements. But in both cases they failed. The mass movements of recent months in North Africa and the Middle East show the potential force of the working class and poor to change society.

In Iraq and, especially, Lebanon, these non-sectarian movements sought to overcome religious and national differences in a unified struggle against the regimes and for real change. Now there is a danger that sectarian divisions could once again come to the fore, significantly most Sunni and Kurd members of the Iraqi parliament did not attend the vote on US troops remaining.

The challenge in each country is to build upon these struggles and create democratic organisations of working people, youth and the poor. Such organisations can both lead the struggle for change and also be the basis for a government that breaks the power of the ruling class and breaks with both imperialism and capitalism, thereby creating the basis for a genuinely socialist transformation of society.

Such is the situation in North Africa and the Middle East that this kind of development in any single country would have a rapid international impact. Today the struggle against imperialist interventions like Trump's assassinations and bombings needs to go hand-in-hand with helping to build the forces for socialist change as the only way to break out of the cycle of wars and repression and liberate the vast majority.