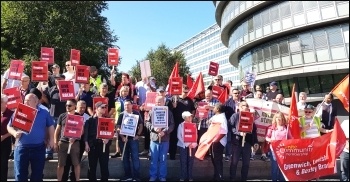 Exhausted bus drivers in London are planning to strike, demanding that Transport for London (TfL) take action "to tackle chronic levels of fatigue being experienced by bus drivers."

Unite the Union is starting a consultative ballot of over 20,000 members employed as London bus drivers later this month, and if a yes vote is secured, a full industrial action ballot will then follow.

Some individual bus operators have suggested that the solution is simply about ensuring drivers get more sleep!

But a survey by Loughborough University which was commissioned by TfL, and published last August, discovered that 21% of bus drivers had to 'fight sleepiness' at least two or three times a week and 17% had actually fallen asleep at the wheel at least once in the past year. (See 'Unions must fight to make bus drivers and passengers safe')