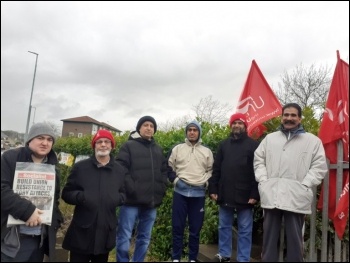 Members of Unite the Union at the Westex Carpets factory in Cleckheaton, west Yorkshire, are about to reach the two month mark in their ongoing dispute over pay.

The strike began on 20 November after workers rejected a minimal pay rise which was then withdrawn by the company. It has since refused further dialogue.

Dave, shop steward at the factory told us: "The company are sourcing yarn from an outside company to bypass a large part of the production process, and have now started to employ staff to fill in the gaps left by the members on strike.

"This, however, has not diminished the resolve of the workers on strike and we remain resolute in our goal of seeking a fair and just pay increase."

In the meantime, trade unionists should keep donations coming into the strike fund: