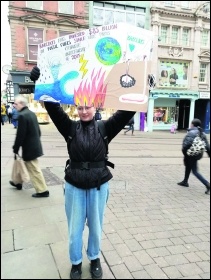 20 young people protested outside Barclays bank in Nottingham on 11 January. Eleven pension fund shareholders are putting the first ever climate resolution to Barclay's annual general meeting, calling on the bank to phase out investment in fossil-fuel projects and companies.

Since 2015, Barclays has invested £64 million in fossil-fuel initiatives, including tar sands oil projects in Canada, causing devastation to First Nation lands and communities.

It is not just Barclays but the capitalist system that has caused, and will not solve, the climate crisis. We need socialist change to end climate change.