2020 is the year that will bring the UN Climate Change summit to the UK. But will the world's rulers be able to come up with a solution?

The same conference in 2019 famously agreed nothing, with the two major economies of US and China failing to commit to improving their targets for reducing emissions.

2019 was a year when collective understanding of the scale of climate change moved closer to reality. But capitalist governments and corporations are incapable in acting with the urgency required.

Some capitalists and capitalist commentators do, however, understand the long term consequences of climate change on their ability to make money.

The Bank of England has launched a "climate stress-test" for companies to monitor the effects on their business.

The solution will not be arrived at by discussion groups of capitalists, bound by their unrelenting drive for profits. Solving climate change calls for a plan for the economy, where investment by the state in green technologies can far outstrip any token gestures from the capitalists.

But to make the change required it is vital to be able to harness the vast amount of wealth in society held by a tiny number of corporations. This is why we call for the nationalisation of the top 150 monopolies and the banking system under democratic workers' control and management.

Drawing up a plan to save the environment requires the democratic input of workers who drive the economy and production. It also requires workers to struggle for it. The development of workers joining climate strikes points in the direction of what is necessary in the next decade.

Two young people tried to mug me on my way home. I immediately knocked on the nearest house for assistance. The kind person there straightaway drove me home. He said that this isn't the first incident. That young people, that are hard to find a foster home for, had just been dumped at the address I walked past.

Right-wing politicians try to say there won't be consequences if they make spending cuts. They've been saying it for decades and it's a lie.

Romford is a Tory council, and the provision of services is shocking. But it's exactly the same in Blairite Labour councils. There is a consequence to cuts. From flammable cladding on Grenfell, to no homes, or jobs, or youth services for young people.

All I want is a safe, happy life for me, my partner and son. And all socialists want is a safe environment, with decent jobs, and well-funded services for millions of working-class people. 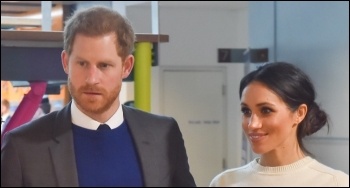 Gosh! Is that a job? photo NorthernIrelandOffice/CC   (Click to enlarge)

Poor Prince Harry indeed! Remember when he boasted about obliterating Afghans - carrying on a long royal heritage of fronting imperialist invasions - from his helicopter? Or the time he thought it was amusing to dress up as a Nazi?

He's a scion of a privileged, bigoted ruling dynasty who has now fallen out with the rest of them.

Harry and Meghan's attempt at adapting to a 'modern monarchy' has inadvertently lobbed a hand-grenade into the House of Windsor.

Not least because it further exposes the privileged, publicly funded sumptuous lifestyles of these feudal relics.

Coming in the wake of Prince Andrew's disastrous PR interview on BBC Newsnight, it's good to see Her Maj experiencing another annus horribilus - something that we commoners experience every year under her reign.

I've no problem with Harry and Meghan pulling out of the royal family, I just hope it's the start of a trend!

Rebecca Long-Bailey announced that she has accepted the ten "pledges" demanded by the Jewish Board of Deputies. These include giving a monopoly of "antisemitism training" to the so-called "Jewish Labour Movement" (a body which refused to campaign for Labour at the last election), outsourcing disciplinary procedures - including the expulsion of members - to an outside body independent of control of the party membership, and expelling members who campaign to support those unjustly expelled.

This capitulation on antisemitism is bad. But far worse is that she was capable of such a capitulation. A socialist prime minister will have to stand up to Trump and his nuclear arsenal, stand up to the IMF, stand up to the CIA, MI6, the permanent civil service, the press barons, the corporations and the capitalist class at home and abroad.

Syriza was crushed by the IMF and the ECB who pulled the plug on the Greek economy. In Chile, the Popular Unity government was crushed by a CIA led coup which massacred thousands of socialists.

Long-Bailey capitulated to the Jewish Board of Deputies, a committee of minor community nobodies who don't even have a pea-shooter between them.

Socialist ideas are utterly useless if you are not prepared to fight for them.

Whoever comes out on top, if Labour's leaders aren't committed to reintroducing mandatory reselection then the party is just going to recede back to Blairite control and a return to the liberal pro-establishment politics that working-class people have had enough of.

"If a left-wing candidate is to pick up the mantle laid down by Corbyn and build on it, it's essential they don't retreat from any of his pledges on nationalisation, workers' rights, housing, abolition of student fees and all the other urgently needed steps in the manifesto he spearheaded" (the Socialist, 9 January).

They will also need to show a commitment to transforming the party by building support for the selection of fighting socialist MPs and councillors - who are willing to take on the Tories - and ensure Labour councils join the resistance and refuse to carry out further Tory cuts!

Front and back stabbers

Labour leadership candidate Jess Philips once said: "I would knife Jeremy Corbyn in the front, not the back." It's important to remember this quote.

A careerist at heart, her policies will be a return of Labour trying to convince big business that they'll manage British capitalism better than the Tories and continuing austerity.