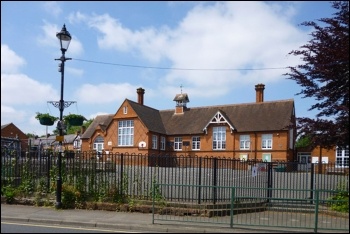 We've won. But the fight is far from over.

On the eve their second round of strike action, National Education Union (NEU) members won the reprieve. They were ready with more strike action if academisation continued.

St Angela's is a Catholic school. The diocese wants all 14 of its schools to join a multi-academy trust.

The NEU is campaigning with parents across east London to stop this happening. St Angela's balloted for strike action as soon as they caught wind of the academisation threat.

NEU members at St Michael's school in Newham will be out 21-23 January. Their strike days will hit six if management don't back down. And St Bon's is balloting for action too.

Along with supporters, the striking teachers at St Michael's discussed the importance of continuing to win over parents' support. Niall Mulholland, local Socialist Party member, recounted how he and other parents organised support for striking teachers at Stratford Academy, in 2012, successfully forcing back senior management's planned attacks.

Supporters of the teachers planned to leaflet outside a parents' meeting organised by senior management at St Michael's about the dispute to counter management misinformation.