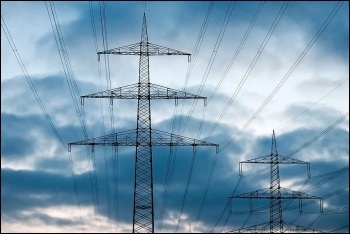 A debate, of sorts, is opening up on nationalisation in the Labour leadership election. Support for public ownership - or not - is an indication of which class interests a party serves - workers or bosses.

But we also said that it is necessary to go further still - to take the main levers of the economy out of the hands of the billionaires and place them into the hands of the working-class majority - in order to democratically plan production in the interests of all.

Voters polled in December 2019 were six percentage points more likely to support railway and water nationalisation than they were at the 2017 election. The same poll found that support for nationalising bus companies is up nine points. Support for public ownership is even higher among young people.

A spokesperson for the right-wing frontrunner Keir Starmer said: "Keir supports expanding common ownership, whether by outright nationalisation or by other forms such as municipals, community organisations or co-operatives: all of which mean services are run for the public, not for shareholders."

Another right-wing candidate, Lisa Nandy, backs rail nationalisation (who doesn't?) but opposes public ownership of energy. Rebecca Long-Bailey on the other hand says she supports the Labour Party manifesto.

There may be circumstances where genuine workers' cooperatives can play a positive role - but Starmer is attempting to blur the lines on what nationalisation is about.

Publicly owned companies should be run not "for the public" under "common ownership" but under democratic workers' control and management, based on elected committees of service users and representatives of the trade union movement in each workplace, the trade unions nationally, and a government representing working-class interests as a whole.

Compensation should be paid to small shareholders and pension schemes on the basis of proven need. Elected committees, accountable to the working class, could make the call.

To solve the problems faced by both people and the environment requires more than just removing the profit motive from those parts of the economy where it's clear privatisation has failed - it means removing the grip of big business from society altogether.

Recent figures put it clearly. While austerity has seen wages stagnate over the last decade, the amount paid to shareholders by the UK's largest companies listed in the Ftse 100 has doubled. It reached a record £110 billion last year! Since 2011, another £20 billion a year has been spent by companies on share buybacks in the UK.

Nationalisation of the top 150 companies and banks that dominate the economy would provide the basis to begin democratically planning production, and the use of resources properly, without interference from the 0.1%.