Phones4U founder John Caudwell's second home in Mayfair is worth a quarter of a billion pounds. The eight-floor, 15-bedroom palace boasts a basement spa, "snow shower" (what?) and indoor river with live fish.

Purchased from a Channel Island tax haven, the mansion's £65 million renovation needed 20,000 sheets of gold leaf and a workforce of 300 at one stage. Billionaire Caudwell, 97th richest person in the UK, had to press his ballroom into service as a canteen.

A Sunday Times journalist invited into this "Willy Wonka" compound reported feeling "nauseous and keenly aware of my own insignificance in the universe" beneath the marble stairway's five crystal chandeliers.

As for Caudwell himself, he insisted the reporter record his conviction that "the rich-poor divide in society is really quite disgusting. It's very difficult to justify people with billions of pounds when there are people all around the world starving to death and living in extraordinary poverty." Indeed.

He says he intends to donate 70-90% of his riches to charity (so as not to spoil his kids - leaving them a mere hundred million or so). We say: cut out the middleman! Nationalise the billionaires' assets now.

Among others, the wife of a Sri Lankan airline executive was promised $16.8 million in backhanders, and agents for a Taiwanese airline pocketed $14.3 million for ordering 20 planes. But the Serious Fraud Office's use of a 'deferred prosecution agreement' means Airbus chiefs might not face trial. 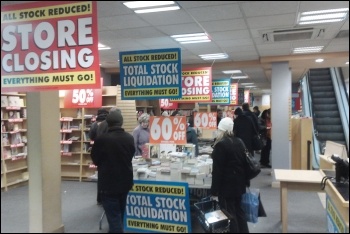 Almost 10,000 UK retail jobs went in the first month of this year alone, reports the Centre for Retail Research. By the end of January, bosses had destroyed 9,949 posts, with another 1,200 under threat at Beales and Hawkin's Bazaar. 143,100 retail jobs went during 2019.

The 'internationalist' EU allowed 34,361 people fleeing destitution, repression and war to die between 1993 and mid-2018, most of them at sea, said Dutch NGO United. Over 1,000 drowned in the Mediterranean in the first nine months of 2019, according to the UN.