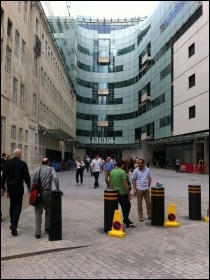 All is far from perfect in the BBC. That said, because of union organisation it is one of the better-paid sections of the union, with better conditions. A defeat for BBC members would embolden employers across the media.

Cuts are to be spread across the world service, radio and news.

The implications of the cuts go beyond the pay and conditions of journalists. They directly touch on the public's right to know. Newsnight is being particularly targeted. Half of its in-depth films are to be cut. Its investigative journalism is also to be reduced.

Newsnight investigations have exposed a number of important scandals, involving politicians and major business figures. Because of their complexity, and the draconian nature of the libel laws, these are usually the sort of investigations that only a large organisation like the BBC can undertake.

A significant part of this is the Johnson government trying to silence the BBC and intimidate it into restricting itself to 'safe' programming.

Internationally, the BBC provides the most comprehensive news coverage, through the world service and other platforms. It is not above criticism. However, it is provided by journalists who are mostly members of the NUJ.

Weakening the BBC is to allow news coverage to be filtered through Rupert Murdoch and his ilk. They are profit-driven, with an explicitly right-wing agenda, and non-union.

BBC News is not just about world events and exposing scandals. BBC local news provides a news service for communities across Great Britain and Northern Ireland.

That is very important because, between 2004 and the end of 2018, there was a net loss of 245 local newspapers. It is no longer unusual for large towns not to have a local paper.

The NUJ has said it will resist the BBC cuts. Plans have yet to be announced. Any action the union takes must have the widest support from the trade union movement.