From The Socialist newspaper, 4 February 2020 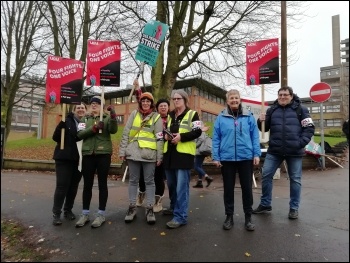 The University and College Union (UCU) has announced 14 days of further strike action for universities currently in dispute over pensions, pay and conditions.

The action will start on Thursday 20 February and escalate each week, finishing with a week-long walkout from Monday 9 to Friday 13 March. In total, 74 universities will be taking part, 14 more than in the eight days of action before Christmas.

As a result, over 1.2 million students will be affected. UCU general secretary, Jo Grady, has warned that the union is prepared to re-ballot members over Easter to keep the mandate for industrial action live when students sit their exams later in the summer.

While the UCU higher education committee was expected to announce the dates for the USS pensions dispute, as we reported in the Socialist previously, in the 'four fights' dispute the situation was less clear.

It was thrown into even more uncertainty when, just two days before the higher education committee met, employer representatives, UCEA, tabled and published an offer in the dispute over pay, workload, unequal pay gaps and casualisation.

However, the higher education committee voted to reject the offer which did not include any increase in pay from their current offer of 1.8%, or anything beyond loose commitments on the other aspects of the dispute.

This decision to reject the offer and sustain the combined action is a positive step forward for the union and reflects a determination amongst members to rewind years of marketisation in higher education.

However, rank and file members on the ground must be prepared to respond to further attempts to undermine or derail the action in the build-up to the strikes. This must include being prepared to reject any offers which do not deliver on all areas of the two disputes.

This will be best achieved by electing strong local strike committees to democratically organise and lead the action, including linking up with student unions and student groups on campus.