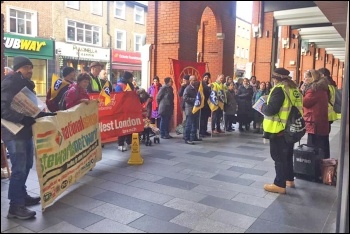 Following their successful action in spring 2019, PCS union members were reballoted in November when talks broke down.

At a strike rally, Labour's shadow chancellor John McDonnell spoke against the closure of the office and strikers were joined by representatives from the RMT, Unite and Unison trade unions, the NSSN and Ealing and Hillingdon trade union councils.

Strikers chose to target HMRC's tax deadline date as they continue to fight to save their jobs and services.

In the upcoming PCS elections the newly formed Broad Left Network, made up of socialists from across the union, is standing on a fighting programme. Socialist Party members Marion Lloyd and Dave Semple head up the list of candidates standing for president and vice-president respectively, and other members are standing for the national executive committee.